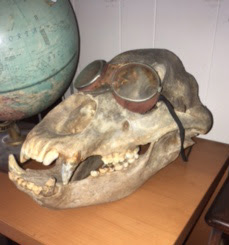 Over on Facebook, my friend Kyle Cassidy quoted me as saying to him, "The harder I work, the luckier I get."

I have only the haziest recollection of saying that, but it sure sounds like me. Certainly, all my heroes -- Gene Wolfe, Ursula K. Le Guin, Samuel R. Delany, the list goes on an on -- have been hard workers.

So I feel the collective weight of their potential disapproval on finding myself perilously close to not posting here today. Long ago, when I began this blog, I committed to posting twice weekly. Normally, I manage three times. Only rarely have I failed to post more than once.

But that's no excuse. So here it is, my second post of the week. I've been working all day, and at this point, even as simple an act of writing as this is hard work.

But I do it just to keep my luck up.


Above: A steampunk cave bear.