Everfair and the Utopian Tradition 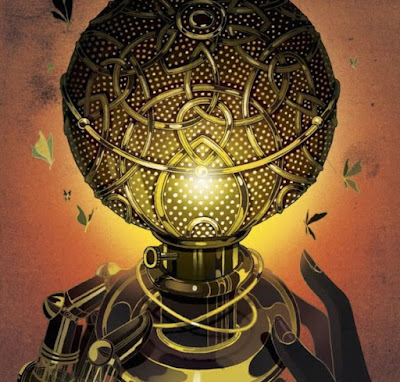 Nisi Shawl's  first novel, Everfair, comes with its own origin story, and it’s a good one. As Shawl revealed in John Scalzi’s blog Whatever:

The impetus for writing Everfair came out of a 2009 World Fantasy Convention panel I was drafted onto. The topic was steampunk; the other participants were Liz Gorinsky, Ann VanderMeer, Michael Swanwick, and Deborah Biancotti. What I didn’t understand going into the panel was why, with my love of Victorian literature and my self-admitted gear kink, I didn’t groove heavily on this genre? The answer I discovered and propounded to the audience: disgust caused by steampunk’s cozy relationship with colonialism. Enough with the be-goggled pith helmets and offscreen resource extraction already, I declared—I was going to write a steampunk novel set in the Belgian Congo! Egged on by Swanwick’s shudders and eye-rolling I added:

This is a marvelous bit of myth-making and, as all good myths must be, it’s true. I don’t recall rolling my eyes, but I definitely shuddered. Literally and repeatedly. Because the essence of steampunk is fun and the thought of setting a joyous romp in a time and place that King Leopold made as close as anyone’s come to creating a Hell on Earth seemed to me, to put it mildly, impossible.

So let me begin  by admitting that, yes, Nisi Shawl has accomplished what I thought could not be done. But the anecdote inadvertently does Everfair a disfavor by linking it too firmly to steampunk and thus placing the suggestion in the readers’ minds that its chief accomplishment is to take the subgenre to an area new to it. (In a subsequent Locus interview, Shawl specified two writers who wrote in that area before her.) In fact, its origins aside, the connections with steampunk are tangential to her novel’s main concerns and accomplishments.

A quick recap of the premises: In the Nineteenth Century the Fabian Society acquires a great deal of money and with it buys a fraction of the Belgian Congo from King Leopold. There, with the aid of steampunk technology largely unavailable to the rest of the world, they intend to create an ideal society. This is told through the intertwined lives of several different protagonists most of whom, as an added treat for readers who like to puzzle such things out, are based on real historical figures.

Everfair, which rhymes with “neverwhere” and echoes Samuel Butler’s novel Erewhon, declares its intention in the title. It is primarily concerned not with the lives, loves, and fates of its characters, engaging though they are. Nor is it a steampunk romp, though the first half or so, in which a Fabian government is established, new technology is invented (chiefly -- and it was cunning of Shawl to find this way of indicating Belgian cruelty without wallowing in atrocities -- artificial limbs and other prosthetics), and an airship war is waged against the European oppressors, is certainly entertaining enough to qualify. And while the novel soon becomes an alternative history, this is far from being its main concern.

Everfair is a Utopian novel.

It is, moreover, to borrow Ursula Le Guin’s useful subtitle to The Dispossessed, “an Ambiguous Utopia.”

By dumping her Utopia in the sea of history, Shawl is able to question and test the very idea of Utopia in a more rigorous manner than is usual.

What happens then? Interesting things. A romance is destroyed by one character's unrecognized (by herself) racism. World War I comes along, and the Everfair government, after free and open debate, chooses sides unwisely. The king of the native people reasserts his authority and disbands the ruling council. Later, he expels all Europeans from Everfair...

There is a school of thought in Buddhism that holds that true enlightenment can be achieved -- but only for an instant. Perhaps something similar applies to Utopias. At novel's close, the main characters have good reason to think their enterprise was a failure. Only the reader, looking in from outside and aware of the alternative, knows better.

I wish I had the time expand on all this at great length. Alas, I have obligations. I cannot here do justice to this wise and important book. All I can do is urge you to read Everfair.

Then find someone else who has done the same and talk -- argue if you wish -- about its ideas.

Especially given the past 2 days, I will be reading Everfair.

Michael, will you be gracing us with your presence at Philcon?