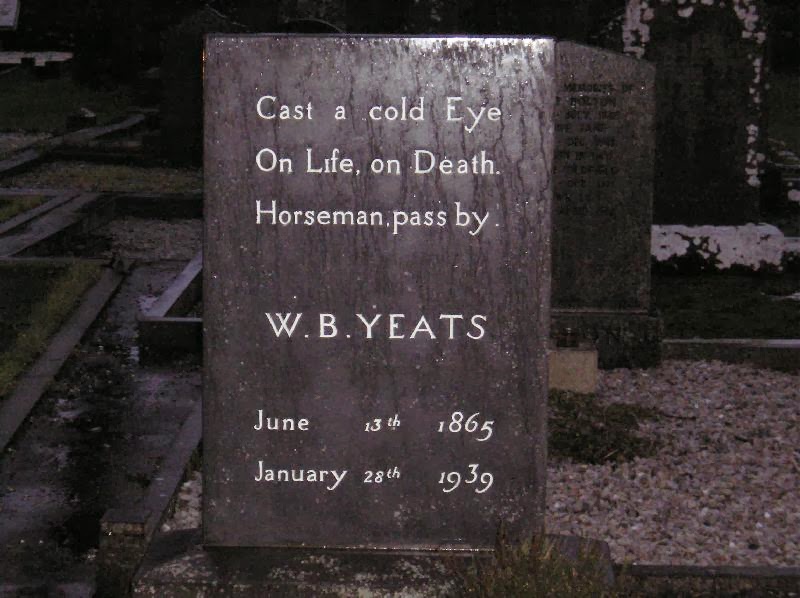 I am home again and, as usual after such trips, weary as weary can be.  In such a mood, I tend to find myself reminiscing about past trips and today is no different.  My thoughts are filled with the journey Marianne and I made to Ireland in 1982.  All of Ireland is wonderful but the West was particularly so and many of of my best memories of that beautiful land arose there.

One cannot be of a literary bent and visit the West without going to Thoor Ballylee, the Norman keep that William Butler Yeats and his wife George rehabbed and made their home.  We did and then, later the same day I believe, looked up Yeats' grave in Drumcliff.  That's it pictured above.  The inscription came from the final lines of the final section of Yeats' poem "Under Ben Bulben."  The relevant lines of which are:

Under bare Ben Bulben's head
In Drumcliff churchyard Yeats is laid.
An ancestor was rector there
Long years ago, a church stands near,
By the road an ancient cross.
No marble, no conventional phrase;
On limestone quarried near the spot
By his command these words are cut:
Cast a cold eye
On life, on death.
Horseman, pass by!


The grave was small and simple.  There are many far grander in the same little cemetery.   There were no flowers laid upon it.  But -- such is the power of words! -- I was profoundly moved by it.  I lowered my head and closed my eyes and recited the epitaph from memory.

Then I stole a flower from another grave and laid it upon the Yeats's.  Poets must have their due.

A granduncle of mine, Brian MacNeill, was in the Irregulars, and was shot with five others on the slopes of Ben Bulben during the Irish Civil War (his father, Eoin, was a member of the Free State government, to which the general who likely ordered him shot reported). http://www.youtube.com/watch?v=dDVOEh1J0Pk

Out-worn heart, in a time out-worn,
Come clear of the nets of wrong and right;
Laugh, heart, again in the grey twilight,
Sigh, heart, again in the dew of the morn.
Your mother Eire is aways young,
Dew ever shining and twilight grey;
Though hope fall from you and love decay,
Burning in fires of a slanderous tongue.
Come, heart, where hill is heaped upon hill:
For there the mystical brotherhood
Of sun and moon and hollow and wood
And river and stream work out their will;
And God stands winding His lonely horn,
And time and the world are ever in flight;
And love is less kind than the grey twilight,
And hope is less dear than the dew of the morn.
+++
Sure, the fellow had a way with words. It's a Western thing, I'm thinking, though the Leinstermen have a fair hand, and Heaney was an Ulsterman.

Earth, receive an honoured guest:
William Yeats is laid to rest.
Let the Irish vessel lie,
Emptied of its poetry.

In the deserts of the heart
Let the healing fountain start,
In the prison of his days
Teach the free man how to praise.

From memory, so maybe not word-perfect.