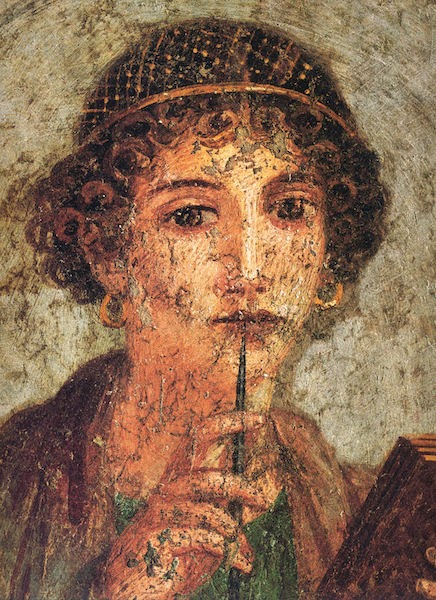 Terrific news today.  Two previously unknown poems by Sappho have been discovered, one of them said to be virtually complete!  This is a big deal because almost none of the great poet's work survived into modern times.  We only know that Sappho was a great poet, in fact, because the ancients said so.

I have a collection assembled by Anne Carson titled If Not, Winter, assembling every word of Sappho that survives.  It begins with the famous "Hymn to Aphrodite" (also known as Fragment 1), which as of 2002 was the only complete poem, and then quickly turns fragmentary.  Fragment 32, for example, in its entirety, is:

who honored me
by giving their works


Maddening.  So I made my own small corrective in Dancing With Bears.  In it, Aubrey Darger, confidence artist extraordinaire has found Ivan the Terrible's library, which I imagined as being stuffed with every lost book of antiquity we most wish had survived.  Here, he is interrupted in his reading by a young colleague:


Darger picked up his book, adjusted the oil lamp, and said, “Listen to this:

“Summer will be ours, if you but say you love me,
Night-hawks flitting under the stars
And jasmine perfuming your skin.
If not, winter.  And I –”

“I don’t see why I had to pay them so much.  They didn’t do nothing but put up a bunch of posters, and keep an eye out for the goats.  I did all the fucking work.”

With a sigh, Darger shut his book again.  “Admittedly, my paraphrase from Sappho’s impeccable Greek was a touch rough.  But you had the opportunity to hear a poem that was long believed to be lost forever, and you brushed it aside simply to whinge that your comrades weren’t pulling their weight.”


If only Darger hadn't been interrupted!  But let's be honest.  Even though I could fake up the poem-opening, constructed from the same fragment that gave Carson the title of her book, there was no way I could create even a rough English-language paraphrase of a great lost poem.

Still, for just an instant, there was a hint, a suggestion, a hopeful dream of something  I could never have brought into existence myself.  I'm rather proud of that.

I was just recently reading an essay on Kenneth Rexroth by Gregory McNamee that ties in rather interestingly with your own Sappho Interrupted:


"Four lines of poetry, then, led Rexroth as similar lines led Pound, Eliot, Joyce, Aldington, H.D., to the recovery of Greece and the ancient past of the modern mind. It is a blessing that four lines were enough, for Kenneth Rexroth and his anonymous friend, although they would not have known it in 1920, had only a small portion of the complete “Apple Orchard” poem with which to work. The full text, originally painted on an Attic amphora, was not reconstructed until 1937, in Fascist Italy, when Medea Norsa published the restored manuscript. I venture the following translation:

Leave Crete for this holy temple
Where a lovely grove of apple trees
Fringes an altar that smokes with incense
In your praise.

Shadows of roses fall on the ground,
And cold jets of water whisper in branches,
And shimmering leaves
Rain down deep sleep.

In the meadow stallions browse,
And wildflowers blossom,
And anise fills the air with fragrance.

It is curious that Rexroth, who must have come to know the full text, never chose to expand his translation of 1920, but instead reprinted it again and again. A remembered,
be loved fragment was talisman enough."