My Place in [the] Stars 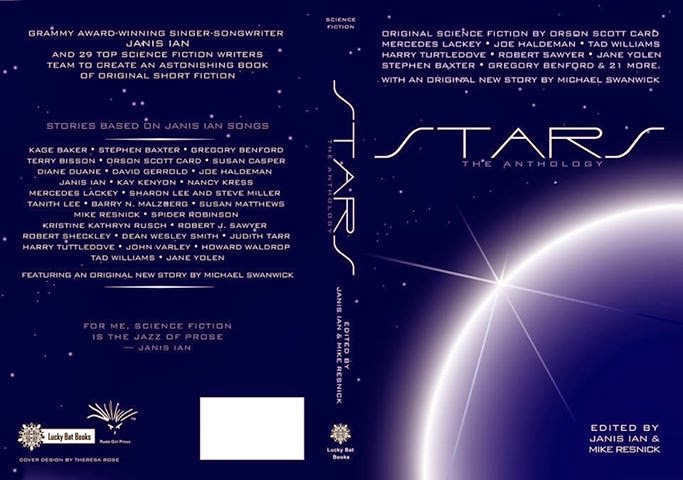 I'm in audio-print again!  Well, almost.  Here's what Janis Ian had to say over on Facebook:

Just got an approval of the POD version of "Stars: The Anthology", edited by Mike Resnick and yours truly, with a new bonus story by Michael Swanwick. I worked with Lucky Bat Press on it and I have to say, they did an amazing job. Thanks, LBP!! The book, audio book, and e-book versions will be out later this month.


The story, I hasten to mention, is new to the anthology but has been published before.  What happened was that I was one of the writers Janis invited to contribute to Stars, her anthology of stories based on or inspired by her songs.  I immediately knew which song I wanted to use as a jumping-off point:  Mary's Eyes.  Here's the magic of art:  when she wrote the song, Janis didn't know she was writing about the Irish experience.  But she was, and the song breaks my heart every time I hear it.

So I began to write, "For I Have Lain Me Down on the Stone of Loneliness and I'll Not Be Back Again."  And a few pages in, after the scene where the protagonist meets Maire na Raghallach,  the plot stalled.  I had the beginning and I knew how it had to end . . . but not how to get from the one place to the other.

These things happen to writers on a regular basis.

I put the story aside and turned to other things.  The anthology was printed without my contribution and did well.  Autumn turned into winter and spring to summer.  Oaks sprouted from acorns, spread their branches across the sky, and were felled by great storms.  Continents drifted.  All the dinosaurs died.

One day, on my umpteenth assault upon the barren slopes of story, "The Stone of Loneliness" came to life in my hands.  I finished it and sold it to Asimov's, since Stars was not only published but long ago fallen out of print.

More time passed, during which the Mastodons may have died off (I wasn't paying close attention).  Then Janis got in touch with me to say that she was creating an audiobook version of the anthology, and would like to include my contribution as a sort of bonus for those who buy it.

This particular story is a personal favorite of mine, in part because it contains more autobiographical bits than anything else I've ever written, and I'll always be grateful to Janis for writing the song that inspired it.  Also I love the song.  Also she was doing the narration herself, shortly after winning an Emmy for the audiobook of her memoir, Society's Child, so it was going to be a very good audio version of the story.  Also, Janis is a pal.  And I really approve of the idea of giving people who buy your stuff something extra.  So of course I said yes.

The story contains fragments of a song that Mary sings, called "Deirdre's Lament."  In the course of checking the pronunciation of all difficult words (part of being an artist and perhaps the most necessary one is attention to detail), Janis asked if I'd mind if she put a tune to the song and sang it in the narration.

I let on that I supposed I could live with that.

Then Janis proposed to register her version of the song and give me a co-writing credit.  "Um..." I said.  "I didn't write it.  The original is a traditional Irish verse and the English version was written by Sir Samuel Ferguson."

But apparently the way these things work my copying the lyrics out of a Victorian collection of Irish verse counts, and that's how I came to share a writing credit with Janis Ian.

It's an astonishing world, sometimes.


And since I know you're curious about the title . . .

Rather than make you wait for Stars to come out, here's the explanation, taken from my own story:

The Stone of Loneliness was a fallen menhir or standing stone, something not at all uncommon throughout the British Isles.  They’d been reared by unknown people for reasons still not understood in Megalithic times, sometimes arranged in circles, and other times as solitary monuments.  There were faded cup-and-ring lines carved into what had been the stone’s upper end.  And it was broad enough that a grown man could lie  down on it [...] it was said to be a cure for homesickness.  So, during the Famine, emigrants would spend their last night atop it before leaving Ireland forever.


Many years ago, I found the Stone of Loneliness by the entrance the the graveyard of an abandoned church in the West of Ireland.  It was a beautiful, blue-skyed day.  I lay down upon it.

And I felt all the loneliness in the world flow into my body.