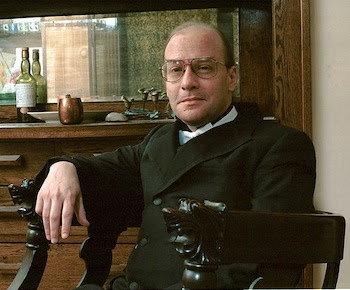 In the current issue of Locus, Graham Sleight wraps up his admirable series of looks backward at the most important books of major science fiction writers with a contemplation on the works of John M. Ford, the guy we all called "Mike."  It makes me sad to think of him because he died far too young, but we owe it to the man to bring him up every now and then.

As Sleight notes, Ford's career was all over the map -- poetry, gaming scenarios (he was one of the beta testers for Dungeons and Dragons), fantasy, science fiction, even Star Trek tie-ins . . .  One year he won the World Fantasy Award for Winter Solstice, Camelot Station, a chapbook collection of formally perfect poems mashing together the Matter of Britain with Victorian transportation, which he sent out to his friends as a Christmas card.

Let me repeat that:  He won the World Fantasy Award for his Christmas card.

Sometimes it seemed like Mike was trying desperately to fail -- and not succeeding at it.  As a result, his reputation today is not a patch on what it would be if he had found one single nail and hammered on it to the exclusion of all others.  Graham Sleight effectively apologizes for indulging himself in covering a writer whose fame didn't approach that of the others he'd written about.  Albeit one who might have been as famous as any of them if he had only tried.

But so far as I could tell, success was never Mike Ford's intent.  My best guess is that he was simply looking for tasks that would entertain his extremely fine mind.  Jesus, he was smart!  He couldn't have hidden that if he'd tried.

And, um . . . that's all I had to say.  You might want to look up his fantasy novel The Dragon Waiting: A Masque of History.  It won the World Fantasy Award too.  Even though I'm certain that was not his intent

For a long time I was only aware of him as "the clever commenter on Making Light" - the one who made reading it worthwhile.

There was the Damon Runyan does Shakespeare: http://nielsenhayden.com/makinglight/archives/005235.html

but also just the day to day wit, the clever and supple drive-by one liners.

Then I read _The Last Hot Time_. It was as if I'd discovered the primal text from which all inferior pulp adventures and elfy storys were derived. This was the Golden Age from which our civilisation had fallen.

I have a low tolerance for elves in the modern high tech world (The Last Hot Time and Iron Dragon/Dragons of Babel might be the only exceptions) but this was a delight. I guess I wouldn't have minded if he'd hammered that particular nail a bit more.

Shame about your trip to China btw - hope it can happen soon.

Yes! That was Mike -- being brilliant in places where it would do him no damn good at all. Just because they were there.

Mike's work was a delight to people who happened upon him, but if they didn't . . . well, he was working on something else and so he really didn't want to know.

I think the great Paleolithic artists were very much like John M. Ford.

I remember him from the early Asimov magazine days.

Talented, smart, I was never sure I understood all of what he was saying at times.

Sorry to hear we've lost another voice and mind.

I never met Mike, but I know people who were friends of his, and I've been reading everything of his I can find. My guess is that he didn't like repeating himself; if he'd done something and got it right, he didn't want to do it the same way next time. And as intelligent as he was, and as good a writer and poet, he usually got things right the first time.

For some reason I thought of him the other day, and searched for all his comments on Making Light. Damn, the man had something interesting to say on about any subject you care to name.

One thing that really astounded me was that I found the timestamps on the post he made when he wrote De Vermis, the sonnet that ends "Say what you mean; bear witness, iterate." It was posted 8 hours after the post that suggested the themes, so it had to have been written in less time than that. That's a truly excellent sonnet, made to order. We'll not see one like him soon again.