New Worlds For Everyone! 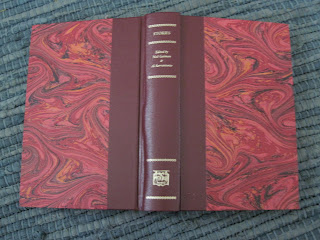 Living in the future as I do, I'm acutely aware that it tends to get a bad rap.  Yeah, sure, we don't have the rocket backpacks, colonies on the moon, or antigrav devices we were promised.  But when I was a kid, there were only nine known planets, all of them local -- and one of them was, unbeknown to us, actually a dwarf planet rather than a real one.  Today we do get to have all the extrasolar planets we want.

As witness the recent discovery of over 760 candidate planets by the Kepler spacecraft.  The Kepler is our go-to guy for the detection and discovery of Earth-sized extrasolar planets.


And the Tuckerization du Jour is . ..


The Warp and the Weft
by
The weaver (sometimes she used threads and other times electrons) was standing in her back yard one day when a raccoon came out of the woods and said, “Are you Sharon Woodbury?”
“Yes,” she said, too astonished to doubt what was happening to her.
“Come with me,” the raccoon said, “you’re urgently needed.”  And it led her into leafy darkness, muttering, “The problem is that She’s been called away on serious business,” as they hurried through the woods.  “But time and tide, you know.  There’s work that absolutely must be done.”
“What are you – ?”   Sharon stepped into an unexpected clearing.  “Oh!”
The thing in the clearing looked a little like a harp.  It looked a little like a threshing machine.  It looked a lot like God’s own loom.
“What is this?” she asked breathlessly.
“Don’t ask questions.  Just weave.”
She did.
Sharon Woodbury wove as she never had before.  She wove beads of dew on spider webs and strings of stars in the sky.  She wove a cascade of sunrises over the Rocky Mountains and one long slow sunset over Lake Champlain.  She wove the triumph of sparrows in dusty streets and the fall of kings in palaces guarded by troops with Uzis.  The birth of colts she wove, and the death of butterflies, summer afternoons and winter blizzards and tangles of autumn smoke in the evening air.  She wove it all.
When she was done, back she was led, all in a daze, to her own back yard.  The raccoon bowed deeply and, handing her an acorn, a dead minnow, and a rusty tin can lid, said, “You’ve earned this.”
Sharon went indoors and into thkitchen.  Her husband was waiting for her there.  “Where’ve you been?” he asked.
But the memories were fading fast and by the time she could answer nothing remained but a sense of something too vast, too intimate to be put into words.  “Oh, Art, she said.  “Life is so . . .  so . . .”  She burst into tears.
Her husband took her into his arms.  “Hush,” he said.  “I’m a jazz musician.  I understand.”
*
Above:  The limited edition of Stories with marbled cover, a bookplate at the front with autographs by editors Neil Gaiman and Al Sarrantonio, inserts with author autographs before each of the stories and for all I know a magic ring which allows you to understand the language of the birds.  I tried one of those things once and, man, you don't want to know what that blue jay is saying about you.
*
Posted by Michael Swanwick at 1:47 AM

*bows in your direction*

That is perfect. Wow. Very cool.

Kelley: He knows who the weaver is and who wove her. I loved this! I know you know why.

Michael, I am dazzled by your story (and mine). Obviously, you are an adept weaver of words. Art and I are totally jazzed by them and my loom (Caroline) thrums her gratitude your way. Sharon

Sharon, you pay for all with the revelation that weavers name their looms. It's obvious that they would once it's been said, of course. But that doesn't make the fact any the less delightful.