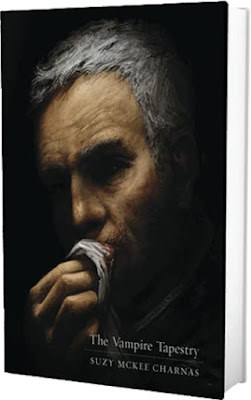 Word is out on social media that Suzy McKee Charnas is no longer with us. She was 83 years old, which is a good run, but it still feels like she died too young. She is possibly best known for Walk to the End of the World and its sequels, but my own personal favorite of her works is The Vampire Tapestry, a novel made up of a series of stories illuminating the inner life of Dr. Edward Weyland, vampire and professor of anthropology.

This is an elegant work, tough and sinewy, beautifully written, and marvelously well thought out. I would go into this in more detail but it's been years since I last reread it, and if I opened the book now I would fall into it, not to reappear for a week. It really is that good.

I met Ms. Charnas only once, back in the eighties, and I doubt I made much of an impression on her. But it's worth recounting because that was the time she first met Judith Moffett.

Judy Moffett began as a serious poet (I greatly admire her collection Whinny Moor Crossing, the title poem in particular), fell into science fiction almost by accident, and quickly became an intensely admired novelist and short fiction writer. She was and is one of those tough-minded, tolerate-no-nonsense, totally admirable women who find in genre a place where they can think and do exactly as they like. And she admired the hell out of Suzy McKee Charnas. Most particularly, as with me, for The Vampire Tapestry.

Judy's day job was as an academic at the University of  Pennsylvania, where she taught, among other things, a science fiction class. As part of which, that year, the class did a reading of a script--written by Charnas, as it turns out--of one of the component stories of the Tapestry. The protagonist was female but the student reading her lines was male.

Judy wrote to Suzy McKee Charnas telling her about the project and inviting her to come and witness an encore performance. An invitation which was readily accepted. Gregory Frost and I, being friends and local writers, were also invited.

Charnas was one of the people she most admired. And her appreciation of The Vampire Tapestry went beyond granular. I remember that she particularly appreciated the presentation of psychological analysis, how it's done and what it can and cannot achieve. As I recall it, she could easily have written a book extolling that novel's virtues. And every word of it would have been deserved. In many ways, Judy was its ideal reader.

So you can imagine how nervous she was at the prospect of meeting her hero. Judith Moffett was not the kind of woman who gets nervous. But this time she was.

And how did work out?

It was a beautiful day with fleecy clouds in a blue sky and sunshine everywhere when I strode across the Penn campus toward the rendezvous point. And there, walking toward me, came Judy and her good friend Suzy, engrossed in conversation and as thick as thieves.

"Judy!" I shouted and "Michael!" she cried, and we hugged (we were neither of us very huggy people but at that moment it seemed right) while Suzy McKee Charnas beamed at us.

It was a lovely moment and a perfect day and the memories of the rest of it are private to Judith Moffett. But, clearly, Suzy McKee Charnas thought almost as highly of Judy as Judy did of her.

And that's all. I just thought you might want to know that.

Above: The brooding and appropriate book cover is of the Centipede Press edition of The Vampire Tapestry.

Posted by Michael Swanwick at 8:54 AM

A wonderful tribute. One of her stories, 'Scorched Supper on New Niger', is terrific and tough to find. Terry Carr did collect it in one of his brilliant anthologies.

For decades, one of the many joys of attending WisCon was the heartwarming knowledge that Suzy McKee Charnas would be there, and I could bask in the fierce warmth of her presence and participation once more. We are all the poorer for losing her. But WisCon continues, and every year we rejoice in the thought that there will be a new Octavia Butler, a new Suzette Haden Elgin, a new Suzy McKee Charnas, a new... who knows?