A Young Photographer at the Mummers Parade 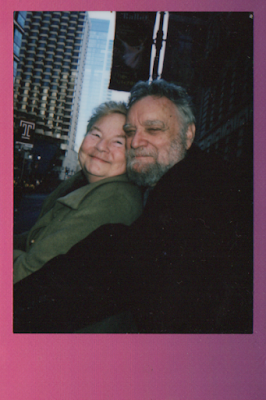 Marianne and I rented a room at the Bellevue last weekend so we could spend New Year's Eve at the Pen & Pencil Club with our cronies and New Year's Day watching the Mummers Parade. Staying in a hotel on Broad Street meant that we could watch the parade until we were cold and weary, then go inside to watch the parade on TV until we were warm and rested and then go out again. Repeating as often as necessary. (The Mummers Parade is over eight hours long.)

Partway through the day, we were watching the Mummers when a young photographer with one of those little cameras that take small Polaroid photographs asked Marianne, "May I take your picture?"

"Sure," Marianne said, so the girl did. Then she asked, "May I take another?"

This time I posed with Marianne. To our surprise, the young photographer then gave Marianne the photo. That's it up above.

It's a good photograph--well composed and visually interesting. Which is not a surprise, because her mother, who was there with her, was also a photographer and to judge from the camera she was carrying a serious one.

That's all. It's a small incident but for us a pleasant one. And a reminder of how pleasant it can be to encounter strangers out on the street

Posted by Michael Swanwick at 9:16 AM