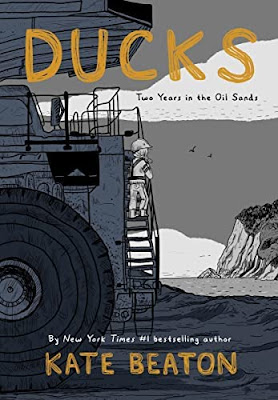 It's hard to sum up this book, but I'll begin by saying that along with Maus by Art Spiegelman, Fun Home by Alison Bechdel, and Watchmen by Alan Moore, it is quite possibly one of the four best graphic novels ever. This despite the fact that unlike the others it lacks a high concept.

Ducks is about the two years Kate Beaton spent in the oil sands of Alberta. The pay is good, particularly for a young woman from Cape Breton with college debts to pay off. But the conditions are dreadful, the work is draining, and as is inevitable where the male-to-female ratio is fifty to one, the misogyny is so thick you could cut it with a knife.

So it's strange that these situations produced a work so delicately nuanced, so observant of human behavior, and so generous in its characterizations (of men in particular) as this one.

Kate Benton is--or, very soon now, I must say was--best known for Hark! A Vagrant, whimsical Web cartoons that were usually based on history or literature, cheerfully skewed, and almost always Canadian-centric. One of my friends from North of the Border referred to her as "Canada's cultural secret weapon." When she gave up on producing free cartoons in order to create children's books, her freeloading readers, myself included, mourned.

And then came Ducks.

Beaton never mentions the word "capitalism," but in its straightforward portrayal of what it's like to perform demanding work that is simultaneously boring and dangerous simply because one has family to support, it's obviously the villain here. The book does not present itself as a coming of age narrative, yet young Kate starts out perfectly likeable and grows to be rather more admirable by the end. The loneliness, isolation, and suffering of those forced to work far from the comforts the rest of us enjoy are presented by Beaton not only without self-pity but with an explicit awareness that many of those around her had it even worse. Her judgements are all even-handed. This book has a large cast of characters and the same insight into its times and the lives of its people as your favorite nineteenth century novel.

And, just as I warned you at the beginning, I've failed to give you the last glimmer of its virtues. Buy it anyway.

The best-known Hark! A Vagrant cartoon (though not, oddly, about Canada) is Dude Watching With the Brontes. You can find it here.

Above: Yes, the cover makes it look boring. It's nothing of the sort.

Posted by Michael Swanwick at 3:30 AM

Kate Beaton is funny, clever and good-hearted. Glad to see her get some kudos here.

Thanks for this. I don't usually do graphic novels, but (as you know, Michael) the topic is certainly of interest. I'll get a copy from our library.