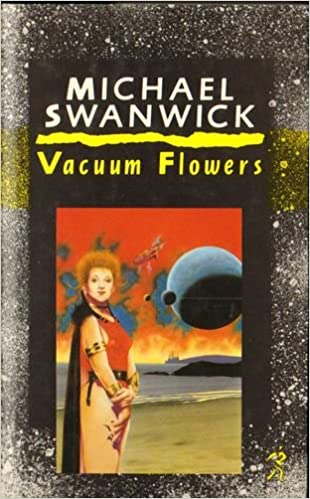 Back in the days of the Cyberpunk-Humanist Wars, I was pretty clearly identified as a humanist--a class enemy. I wasn't in Chairman Bruce's shortlist of the Movement (the term he preferred) or in his Mirrorshades anthology, which cast a much wider net. So that settled that.

Except that with the passing years, the definitions of cyberpunk have gotten vaguer and, more and more, I find myself listed as having been one.

Most recently, Mark Everglade, author of the novel Hemispheres: A Cyberpunk Dystopian, among other works, interviewed me about my novel Vacuum Flowers and about what the  cyberpunk culture was like back in the day.

Here's how the interview begins:

Mark: Cyberpunk had been declared dead by Bruce Sterling in 1986 due to what Bruce Bethke called a lack of continued originality, as publishers and fans forced cyberpunk into repetitive and pedantic tropes (paraphrased). Vacuum Flowers was published in 1987, although you’ve stated you didn’t intend for it to be a full cyberpunk book and really wanted to stress its space opera side. You’ve also stated in the past that cyberpunk fans weren’t particularly warm to the book. What was the overall cyberpunk atmosphere like at that time in the publishing industry and among consumers?

Michael: Let’s start with the observation that it was a phenomenon whose time had come. In retrospect, there were a lot of writers (some unlikely) trying to invent cyberpunk before William Gibson succeeded with stories like “Johnny Mnemonic” and “Burning Chrome” and then codified it with Neuromancer. ..

You can find the intro page about Vacuum Flowers by going to:

(Forgive me for not formatting this as a link; the new Blogger interface is not exactly intuitive.) Those who are already familiar with the novel can scroll down to the bottom of the page to find the button for the interview itself.

Posted by Michael Swanwick at 9:40 AM

I was pointed to you as cyberpunk, and since then I think you have written many, most enjoyable, short stories and books in many different ’categories’. Thank you for all of them.
P. A. I think ’Stations of the Tide’ was superb cyberpunk and it was after Bruce declared it dead.