Burning Chrome and How I Almost Made William Gibson Look Bad 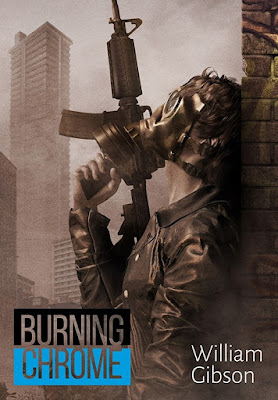 I am awash in nostalgia.

Back when Bill and I co-wrote "Dogfight," which is the reason I received a copy of this book, we were both scruffy young nobodies. A casual meeting at a convention, a few chance words, and we were collaborating on a story. Gibson had a hot rep back then--but only if you were among the few, the new, and the hooked-in. Bill agreed to the collaboration because he's a genial guy. I went into the project because I wanted to see what kind of chops he had.

Pretty damn good, as it turned out.

We used the Hot Typewriter method for the story. Not the Hot Typewriter method of the Fifties, which involved a cheap hotel room, a rented typewriter, a bottle of hootch, and (sometimes) a hooker, but the Eighties version. Which was: One writer had control of the story for a month, during which he could write as much or as little as he wished. He do anything he wanted with it. Change the plot, change the characters, put things in and take things out. There were a couple of small details that Gibson took out that on the next pass I put back only to have him take them out, back and forth several times until at last Bill won. When you're working with somebody good, this can be a very exciting process.

On one of those passes, I came to a section that could only be written by Gibson. Luckily, from my collaborations with Gardner Dozois, I knew what to do. With Gardner, I had only to write a bad imitation of his style and its wrongness would so annoy him that he'd tear it all up and, with enormous labor, write it the proper way. So I wrote a bad William Gibson pastiche and sent it back to him, confident he would redo it from top to bottom.

One month later, I got the story back, expanded, with not one word changed in the pastiche section. In the accompanying letter, Bill was effusive with praise for that section.

Oh crap. I knew that if I let that section go through unchanged, the deficiencies that Bill was blind to would be as obvious to the critics as they were to me. Only, because it was written in Bill's voice (almost), blame for this would fall not on me but on him. And people would conclude that, whatever Bill had once had, he'd lost it.

So I spent much of that month laboring mightily to bring that section up to his standards. I succeeded, I believe, but oh man that was not fun.

End of anecdote. No, I am not going to tell you what section it was. You can read the story and make your own guesses. But I'll never tell you if you were right.

Perhaps he was perfectly aware and just wanted you to do the work.

Oh and as soon as I'm back at my desk I'm ordering a copy from Subterranean Press!

Seriously, Bill worked very hard on that story. And the results reflect it.

I always liked that short-short of yours that presented Ellen Datlow and yourself traipsing through Manhattan and finding 'trivial' stuff like a William Gibson ms. for $5.00. 'Dogfight' is a fine story.

'Dogfight' is indeed a fine story. Now I'm nostalgic for when I found it on the shelf in a shopping-mall bookstore, and devoured it standing there in the stacks.