Puck and Till Eulenspiegel 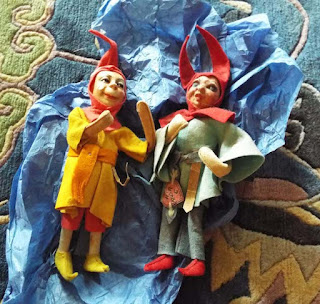 Two old friends from my childhood have come to stay with me! That's Puck on the left and Till Eulenspiegel on the right. They're both dolls.

Till and Puck were gifts from Mrs. Kressner, our next-door neighbor, back in the 1950s. The Kresners were very good friends of the family and their son Bernie, several years older than me, was my hero. He built rockets, kept snakes (temporarily) in cages, collected butterflies, and so on. My sisters, Patty and Mary Carol and I knew that we could drop by Mrs. Kressner's house anytime and she would give us cookies or other treats she had baked herself.

I have no idea why Mrs. Kressner decided to give Puck to my sister Patty and Till Eulenspiegel to me. But I know that they survive to this day because my mother, who was a doll collector in a minor way, confiscated them both and kept them safe in a cabinet with her own dolls.

When I went off to college, I realized that I was going to be traveling light for the next decade, and I gave Til to my sister Mary who, I knew, would appreciate him. And that was that.

Until a couple of weeks ago, when out of the Blue Mary Carol sent me Till, which I thought extremely generous of her. Then, learning of Mary's gift, Patty sent him Puck. Which knocked me flat.

So Till and Puck are united. I haven't found the right place of honor in which to display them yet, but I will.

Both Puck and Till Eulenspiegel are tricksters and as such, a secret but very real presence in my fantasy. I thought of them often when I was writing the Iron Dragon trilogy.