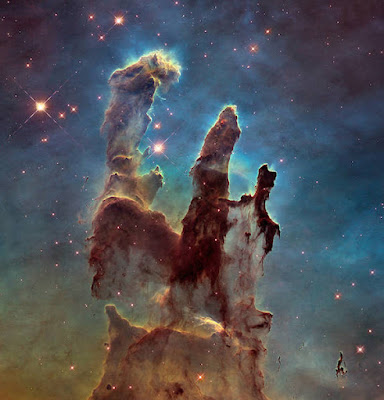 Going over the typescript for a partially-written story, I discovered that a couple of days ago I had written the openings for 17 stories on the backs of the pages. Since I'm (probably) never going to do anything with them, I thought I'd share them with you. If you happen to want to use one, feel free. There's plenty more where these came from.

3. The night before the end of the universe was lush and sultry.

4. The moon was full and our arsenals too.

5. The dogs howled at twilight, passing the news on and on. Mankind was dead

6. A goldfish in a fishbowl knows as much of the universe as do you and I.

7. There are over forty different species of fish in the sea. How dare the biologists say it's dying?

9. I was the fourteenth woman and the third differently-abled person of color to set foot on Pluto. So close to the history books, and so far from anybody caring!

10. Human flesh is gourmet food in thirty-seven civilizations in this arm of the Milky Way alone. Which is why I got a degree in law.

11. How can you doubt I care for you? My zombie armies are about to destroy everything you care about. Leaving only me for you to love.

12. All the waters run to the sea. All the stars run to the black hole at the center of the galaxy. All the Galaxies run to the Strange Attractor. And all my life runs to thee, my one, my only, my dearest love.

13. The chair was plotting against me. I knew it. It knew I knew.  We both knew that nobody else would ever believe it. There was only one passible outcome.

14. After the Event, she was the last woman on Earth. Every straight man and would-be father in the world wanted her. Which was ironic, given her dating history.

15. The micro-aliens invaded Earth in 2170. They were successful in creating cities in the bloodstreams of all the major mammals, including humans. Then came the nano-aliens desireous of their internal habitats.

16.A sewer worker dreamed he was the philosopher Chuang-tse dreaming he was a butterfly. It was the most wonderful dream he had ever had and he wanted never to awaken from it. The analogy to your situation is obvious.

17. Life is real, life is earnest! And your place in it is as comic relief.

Just why did I bother with this exercise? Three reasons, really: To keep in practice, to reassure myself that I still can, and just in case. Decades ago, when I was working as a church secretary in West Philly, I arrived at work early and set myself the challenge of writing ten opening sentences. Number six or seven or eight was "There was something ugly growing in the air over the altar."

I liked this sentence so much that I wrote the next paragraph. Then the one after that. Eventually, after many twists and turns, I'd written "Covenant of Souls," which was published in Omni, and which pleased my greatly.

Nothing came of this exercise, but so what? No writing is ever wasted, if you're a writer.


Above: "The Pillars of Creation," cropped and colored courtesy of NASA.

You missed one of your best - 'The bureaucrat fell from the sky.'

Your number 17 immediately made me think of Damon Knight's You're Another.

Arkapravo, that one was published. These were all written out in ten minutes or so.