"She Saved Us From World War Three" 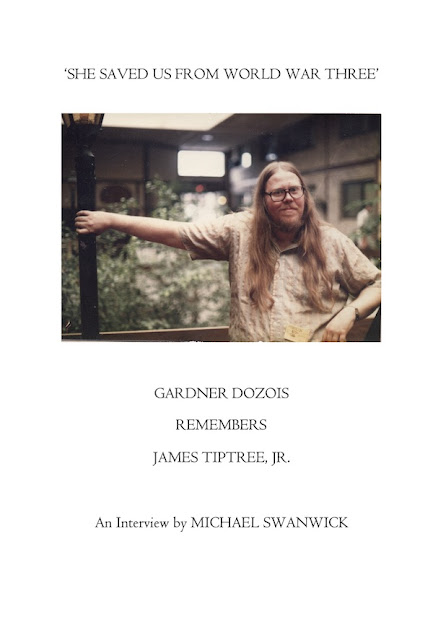 Very few people in the science fiction community ever came face to face with Alice Sheldon, who wrote SF under the pseudonym James Tiptree, Jr, much less met her tarantulas. One of those very few was Gardner Dozois. When he sold his papers to UC Riverside (the proceeds went to keeping his wife, Susan Casper, alive for several years longer than would otherwise have happened), bookman Henry Wessells became aware of the correspondence between Sheldon and Dozois.

Now, Henry has created a chapbook, She Saved Us from World War Three, containing the two most significant letters from that correspondence. The first is from Sheldon, telling Gardner that the secret of her identity was about to go public and that she was not a man but a woman. The second is her relieved response to Gardner's assurance that they were still friends.

Which understates how Gardner felt about Sheldon/Tiptree. He was in awe of her as a writer and remained so after the murder-suicide that ended her life.

To go with the letters and give them some context, I interviewed Gardner about his friendship with Alice Sheldon and this introduction now forms the bulk of the chapbook.

Today is the publication date for She Saved Us from World War Three and it is currently available for sale. It costs $20, which is not cheap for twenty pages of prose but is cheap for a beautifully made limited edition chapbook with fold-out facsimiles of the letters themselves.

Those of you who need it know who you are. Me, I already have my copy. I'm going to dig up the oversized paperclip which Sheldon gave to Gardner  as a souvenir of their meeting and Gardner gave to me because souvenirs meant nothing to him and keep the two of them together. This is a very meaningful publication for me.


Above: The chapbook's cover. Photo by John DeChancie and used with his permission. John is a Mensch. I esteem him highly.