"Paris, a Poem" in SWEDISH! 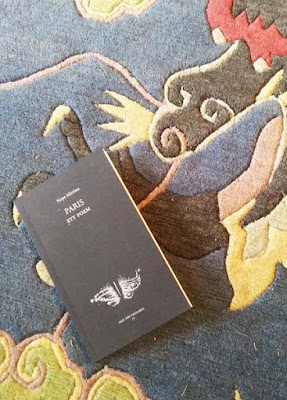 Yet again, something astonishing has arrived in my mailbox. This time, it's a chapbook titled Paris ett poem, containing a Swedish translation (surely the first) of Hoope Mirrlees' modernist masterpiece, Paris, a Poem. Mirrlees, you'll recall, is best known in genre circles for her fantasy novel Lud-in-the-Mist, in academic circles for being on the fringes of Bloomsbury, and in poetic circles for this poem.

Ylva Gislén translated the poem, wrote an introduction, provided explanatory notes, and created two collages for inclusion in the chapbook. All of it, clearly, a labor of love.

Quite a lovely  book. Published by Ellerströms.

The Temporary Culture chapbook assembled by Henry Wessells, "She Saved Us from World War Three," was reviewed by Michael Dirda in the Washington Post. Here's what he said:


Besides being one of the stars of “The Booksellers,” Henry Wessells is also the proprietor of the micro-publisher, Temporary Culture. His latest booklet, “She Saved Us From World War Three,” brings together an interview, essay and two letters highlighting the friendship between Gardner Dozois, the longtime editor of Asimov’s Science Fiction Magazine, and Alice Sheldon, the former Washington intelligence agent whose intense, sometimes feminist sci-fi — no one ever forgets “The Women Men Don’t See” — was written using the pseudonym James Tiptree Jr. In one letter Sheldon explains that she has pretty much stopped writing because “the stories were getting to hurt too much.”


Which is pretty good coverage for a micro-press.