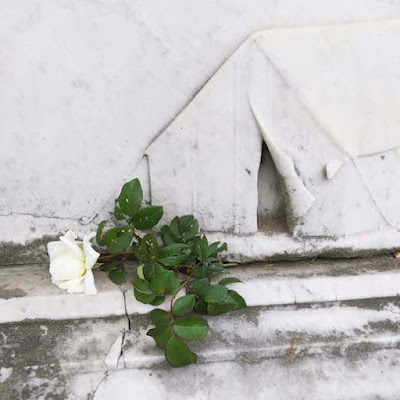 It being Memorial Day, Marianne and I went to Levering Cemetery for the flag-raising ceremony. We cut some roses from the back yard and left them on two graves and a memorial. The white one we left on Hetty Jones' tomb. Technically, she wasn't a soldier, but I don't think any vets would mind. She was one of many young women who volunteered to serve as nurses in the Union field hospitals. In Virginia, she caught one of the diseases that ripped through the wounded and died.. Her family  reared an elaborate marble tomb in her memory--clearly they had money. Every time I see it, I think of what a long and comfortable life she might have had if she hadn't put the welfare of others before her own. 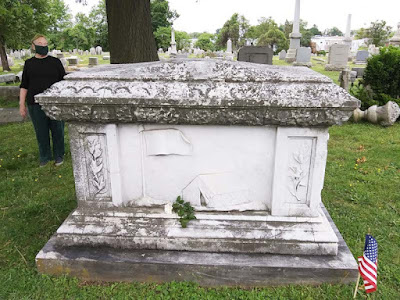 We also left a rose on the memorial to the Virginia troopers who were killed not far from the cemetery by British soldiers during the Revolutionary War. They were trapped in a barn and, if I have this right, given no opportunity to surrender. This was during the bloody mess that was the evacuation of Philadelphia, followed by the Battle of Germantown, and the retreat to Valley Forge. This was probably the darkest moment of the war for the American forces, and the men buried here, so far from their homes, might well have believed their cause was lost. 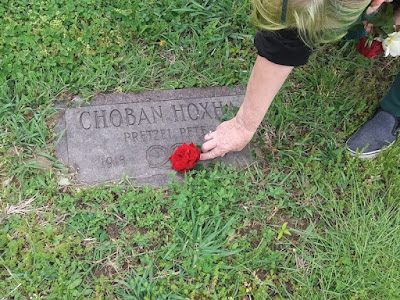 Finally, we left a rose on the grave of Choban Hoxha. He was never an American soldier but during WWII, he was captured by the Germans, so he was probably fighting for the Allies. He spent time in a Nazi prisoner of war camp and then, upon its liberation, was carried away to the Soviet Union  to labor in a work camp there. Somehow, he escaped and made his way first to Istanbul and then to America. He was a gentle, wounded soul, who made a living selling pretzels. Until his final year, no one knew his name or his story, so he was known as Pretzel Pete.

He died penniless, so the community collected money to buy him a stone and the cemetery donated the space. On the stone are the name we all knew him by and the he bore before war came along and swept him away.