Chatting With Chip at the Rosenbach 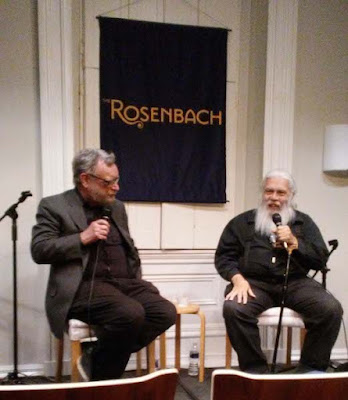 Last Thursday, at the Rosenbach Museum & Library, your go-to place for when you need to check the original manuscript of James Joyce's Ulysses, I took part in a conversation about 1960s science fiction.

The occasion was the publication of the Library of America's American Science Fiction: Eight Classic Novels of the 1960s which includes Samuel R. Delany's Nova and the big draw was of course not me but Chip Delany himself.

(To answer your unspoken questions: No, the event was not recorded nor is it somehow available on the Web. The Rosenbach hopes to change that situation sometime in the future. but for now itour conversation as one with thee snows of yesterday.)

It was a good event. The room was filled and the audience was intelligent and attentive. Delany was his usual charming self. And I was, apparently, very very sincere.

A lot of interesting things were said. I'll share one of them here:

When Nova was first published it sold, to Delany's expressed amazement, for $10,000. This was a record for a science fiction novel at that time. Six months later (iirc), Do Androids Dream of Electric Sheep by Philip K. Dick went for five hundred dollars more. So when a Hollywood director decided he wanted to make a science fiction movie and told his people to buy the most valuable SF novel out there, they picked up PKD's.

Which is why, many years later, Blade Runner hit the silver screen instead of Chip's novel.

Now you know. Next time you're jaunting from parallel world to parallel world, be sure to check out the Ridley Scott version of Nova. It's a stunner.

Not sure I agree with what he did with the ending, though.

Posted by Michael Swanwick at 11:04 AM

I imagine Lorq Von Ray is a very popular character with the dragon pilots.