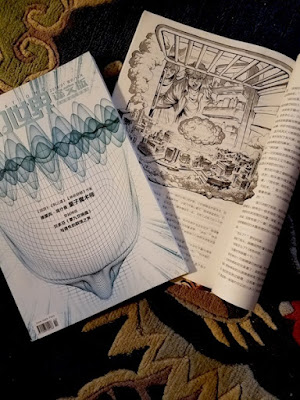 I'm in print in China again. Science Fiction World Translations has published an early story of mine "Ice Age." In it a young couple, freshly moved into a new apartment, discover first a woolly mammoth the size of a horsefly frozen into an ice cube, and then that there's an entire civilization in the freezer compartment of their refrigerator.

The cover of the magazine went to Derek Künsken, whose first novel, The Quantum Magician, has the singular honor of being simultaneously serialized by SFWT and our own Analog. I met Derek in Chengdu last November and he's a nice guy, so good for him. I bought the issue of Analog with the first installment and I'll be reading it just as soon as I can figure out where I left it.

I'm on the road again! More than likely I'll be posting about parts of my trip, along with the usual shenanigans next week.


Above: The illo is mine, the cover Derek's.

Nice story illustration. It's exactly the kind of concept and design that in the old days in, say, circa-1960 GALAXY, a practiced hand like Wallace Wood would have executed very nicely.