A Small Day in Manayunk 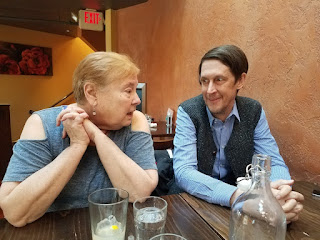 I was present to sign copies of Henry's newest and thinnest ever chapbook Reading in Public, which is to be included with certain copies of his non-fiction magnum opus A Conversation Larger Than the Universe. Which I can say without spoiling anything is about specific science fiction books. Also a cracking good read.

There are days when my life seems extremely pleasant and yesterday was one of those.


And as long as we're talking about Dragonstairs...

The great Blue Moon project approaches. On Thursday, I'll write the text for a chapbook. On Friday, Marianne will create 69 copies of it. On Saturday it will go on sale at the Dragonstairs web site. And shortly after midnight, earliest Sunday morning, all the unsold copies will be burned.

All that's known at this point about the chapbook are its title and the price: Blue Moon. Ten dollars, net to all. Postage included. No preorders.

You have some strange delusion there will be unsold copies.

Most of us figure we better be online when the notice goes out or it will be sold out.