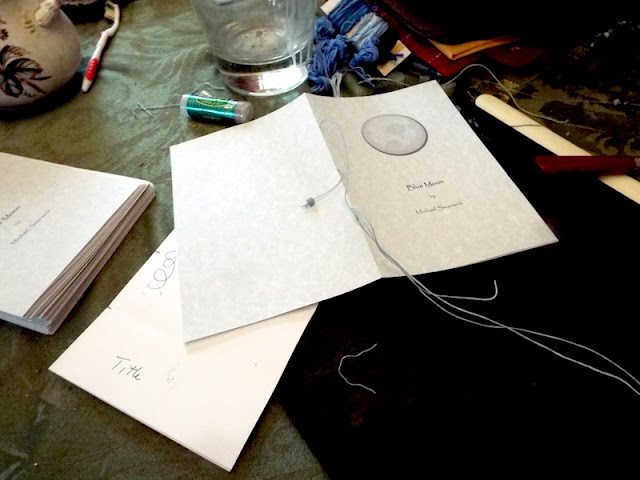 It's a new, new tradition. One that starts today. Once in a blue moon, Dragonstairs Press will publish a chapbook in an edition of 69 and offer it for sale on the day of the blue moon. Then, at midnight, all unsold copies will be burned.


Why? Chiefly because it's a beautiful idea. Books are constantly burning. Go to the oldest section of a library and inhale deeply. That beautiful "old-book smell compounded of lignin, vanillin, and nostalgia," as I put it in The Iron Dragon's Mother, is "the scent of antique culture burning in the slow bonfire of time." Once you fall in love with books, the scent never entirely leaves you.

Tomorrow, Saturday, March 31, is a blue moon. So at midnight tonight, the chapbook Blue Moon, which I wrote yesterday and which Marianne is making even as I type these words, will go on sale at Dragonstairs Press. Exactly 24 hours later,  the unsold copies will be fed to the flame.

Blue Moon contains five flash stories, all in a lunar setting. The chapbook is 8.5" by 5.5", eight pages, hand-stitched, signed and numbered, with a sodalite bead ornament. The price is ten dollars per copy, net to all. Postage included.

Here's what the beads (only one per chapbook) look like: 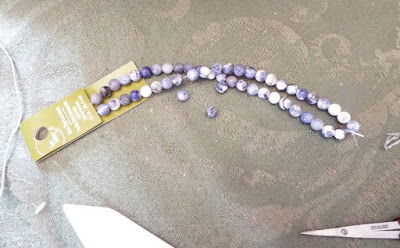 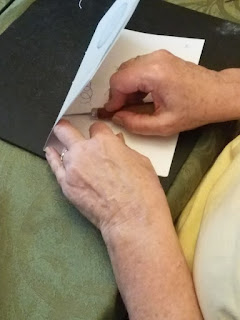 And here's what some of the finished copies look like: 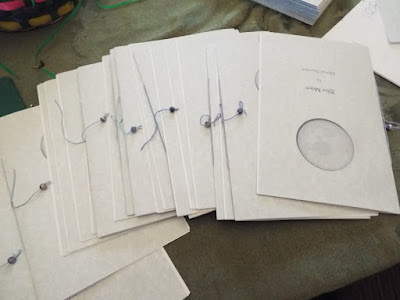 I owe a shout-out to Dagur Hjartarson and Ragnar Helgi Ólafsson, who came up with this idea originally. Their publishing house Tunglið ("Moon" in Icelandic) in Reykjavik publishes only on a full moon, only for a day, only in editions of 69 copies, and burns the unsold copies as soon as that day ends.

You can read about them here.

The only question remains whether anyone who doesn't get up until 7:30 or 8:00 EDT will find out the print run is sold out, or if there might be copies available until 9:00 or 9:30.

Marianne is counting on there being unsold copies. She's really looking forward to the burning.

I am hoping the smoke from the unsold copies lingers on the ones that were fortunate enough to be purchased. It would defintely add an extra dimension to the book.

We bought ours not long after midnight EDT and were lucky enough to get copy #55. Enjoyed it immensely.