The First Good Writing Advice I Ever Got As A Pro 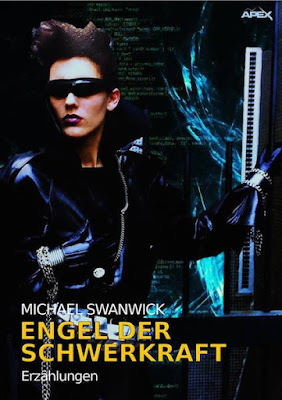 Up above is an advance image of the Engel der Schwerkraft forthcoming German Translation of Gravity's Angels, my first short story collection. I won't pretend that I'm not delighted that my stories will be published there. (Coming soon from Apex-Verlag. Translation by Norbert Stöbe. Cover by Christian Dörge.)

By coincidence, I recently typed out one of the stories therein (I didn't have an e-file because they were all written on a typewriter) to give to a friend for non-commercial reasons. Wow, was that painful. "What's with all the italics?" I said out loud. "Why are there so many commas in strange places?"

Somehow, I restrained myself from rewriting the thing from top to bottom.

Which brought to mind the first good writing advice I ever received as a pro. It came from my agent, the then -living legend, Virginia Kidd. "Never go back and rewrite your published work," she said. "It's always a mistake."

I had no intention of ever rewriting anything I got published, so I couldn't have been putting out vibes that I might do so. Which, I immediately realized, meant that this was a universal or near-universal temptation. So there it is:

Virginia never spelled it out -- she just lay down the law.But I'll do it for you. There are two reasons. First, rewriting a story or novel is as much work as writing a new story -- and it doesn't result in something you can sell as a new story or novel. And second, there is a certain freshness to a story that gets lost in a later rewrite. Rewrites are almost always stiffer: more formally correct and less fun to read.

Which brings to mind the second time Virginia Kidd lay down the law to me. This one I might have been tempted to do had I not been warned away:

This one she explained to me. "Writers are never grateful for positive reviews -- they all think they deserve them. But they'll hate you for a negative one. All writing reviews will do for you is make enemies."

Which is painfully true.

If any of Virginia's other clients have rules to pass along, please do. Maybe we can assemble them into a meme. The kind of meme that's actually useful, I mean.


Above: As I said, I'm delighted to be back in German print again.