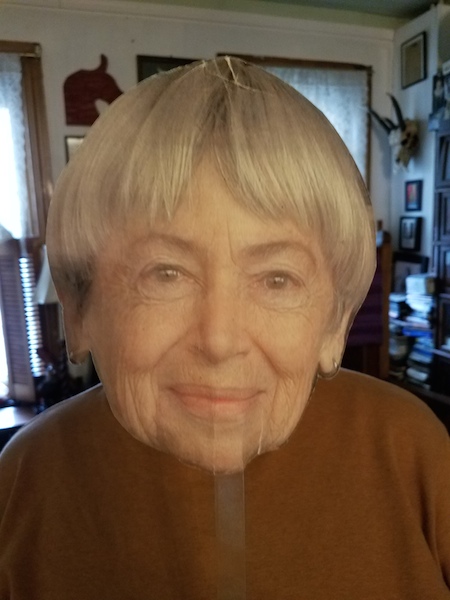 I always hoped to meet Ms Le Guin. I never did. But I read her stories and novels and essays, so the rest doesn't matter. Like most of those who now reading these words, I have lost an elder sister.

In the wake of her death, there will be a sorting-out of Le Guin's work. This is literature, that is tref. The Left Hand of Darkness has a good chance of being declared Canonical as does "The Ones Who Walk Away from Omelas." We can go up and down the (now, alas, completed) bibliography, arguing pleasantly which works might well live forever and which will be reserved for scholars to use as thesis-fodder. But forget that.

Return with me in my memory to those days when she was a new writer whose reputation was no better than her latest story. Imagine what it was like to encounter her work, as I did, unprepared by reputation. Here was someone I'd never heard of before who was doing astonishing things. Whose prose was sleek and elegant. Who might easily have been making a reputation for herself in the mainstream but for inexplicable reasons was down here in the trenches of science fiction with the rest of us.

Imagine reading The Left Hand of Darkness when you were expecting nothing more than a paperback space opera.

Harlan Ellison once accused me of having the "cringe of genre." Yeah, ouch, okay, point taken. But in every generation, there are a few writers so good that you're astonished they exist at all, let alone here in the corner of literature we love most. They include (in and out of genre) Delany, Nabokov, Russ, Barth, Byatt, Pynchon, Wolfe... and Le Guin. Writers of such accomplishment that they define the literary landscape.

I've already made my concluding observation elsewhere, so I apologize to those who have seen it before but...

Marianne's father and my father-in-law, William Christian Porter, was a distinguished lawyer and lay pastor and deacon for many years in his church. When he died, the minister compared him to one of the cedars of Lebanon, saying, "Now he's gone. How different the skyline looks!" I could hear the astonishment, the disbelief in his voice.

Now Ursula is gone. How different the skyline looks!

For me the essential Le Guin books are THE LATHE OF HEAVEN and THE DISPOSSESSED, both astounding and frightening books in different ways.

For the last few mnths I've actually had "send a note of appreciation to Ursula Le Guin" written down on my big to-do list, on the basis that it's good to give thanks, and that people don't last forever. I guess that teaches a pretty obvios lesson.

It was a privilege to read the original Earthsea trilogy in my teens and then The Other Wind in my fifties - I feel like those kids who grew up readin Harry Potter year by year, but on a longer time base.