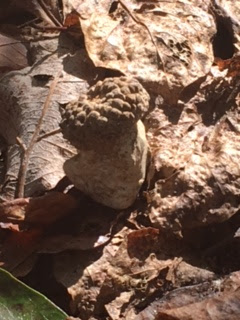 They're hard to spot, difficult to find. But if you're patient and tenacious -- and if you're looking in the right place -- they're there to be found.

Up above: Amid the litter of the forest floor, there's a pebble topped by an acorn cap. Coincidence, you say?  What's that pebble doing atop the leaves? Harrumph. Had it just been thrown there by an energetic foot on a nearby gravel path (but there was no gravel path nearby), what were the odds of an acorn cap, separated from its nut by the force of its fall, landing exactly there? Is that reasonable to expect?

What you see is a boundary marker set out by the Very Wee Folk at the edge of their territory.

Should you chance upon one, your impulse will surely be to shake off the cap and toss the bit of gravel far. Or maybe you'll kick them both as far as ever you can.

The Very Wee Folk are extremely territorial. Feuds have begun over a matter of an inch. Wars have been fought over patches of ground you could stride over in a minute. Generations have bled and died for this stretch of land beneath your notice.

So when you kick over their boundary marker, you're setting the Very wee Folk up to die in great number.

But they're not going to play your sick little game. Kick the thing over and come morning, you're going to be hearing from their lawyer.

If I weren't on vacation, I'd answer that question.


Above: For some reason, I was feeling whimsical.


Posted by Michael Swanwick at 5:32 AM