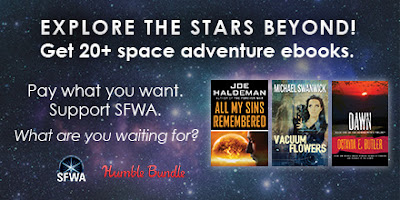 "I know what Humble Bundle is," my son said. "But I'm surprised you know."

Sean, it turns out, is a big Humble Bundle fan. He has, apparently, bought tons of ebooks from them. He never mentioned this fact to me, or even that he reads ebooks because, well, you know... Dads.

At any rate, yes. Vacuum Flowers, my big space novel, chock-full of ideas and near-naked people, is part of a Humble Bundle offer. And it's on the first tier, which means that you can get it and four other excellent books for only a dollar. If that's how little you want to spend.

Here's what it says on the press release:

Humble Bundle and Open Road Media have teamed up to provide 20+ space adventure ebooks from award-winning authors. Choose what you want to pay, and you’ll also be supporting SFWA, which helps support and advocate for some of our favorite SciFi/Fantasy authors.


So you get lots and lots of space adventure, contribute to a worthy cause, and get to name your own price. If that's not your cup of tea, you just don't like reading space adventure ebooks. De gustibus non est disputandum.

The offer, which starts today and ends on the 18th,  can be found here.

There are a lot of Big Names in this bundle. But let me suggest you put in enough money to get Starrigger by John DeChancie. The basic premise sounds almost comic... truck drivers to the stars! But he pulled it off. There's a lot of good old-fashioned science-fictional invention and adventure in this book. Here, from Wikipedia, is the basic premise:

Jake McGraw drives a futuristic cargo truck on the Skyway. The Skyway itself is a mysterious road, built by an unknown race of aliens, which runs across various planets from one portal to another. Driving through a portal (a "tollbooth") instantaneously transports you onto a different planet, many light years away. Humans found the Skyway on Pluto and began expanding along it, encountering various alien races along the way. However no one has a map, or knows where the Skyway begins or ends, and because each portal is one-way, only explored sections with a known return path (discovered by trial and error) are considered safe to travel.

And now you know if that's your sort of thing. Starrigger is the first volume of a trilogy. But if you're like me, you'll consider the fact that there are two more books good news. DeChancie is a fine writer and I'm sorry he's not better known.