My Next Door Neighbor, Who Invaded France 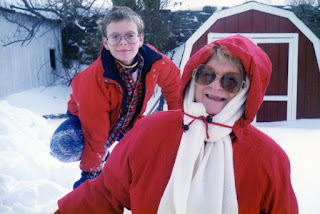 Enid Hodkinson died today.  This means little or nothing to you, but only because you never knew her. Enid was Marianne's and my next-door neighbor for over thirty-six years She was the best of neighbors, bright and funny and friendly and upbeat. And in her youth she invaded France.

Enid was a communications tech in the Royal Air Force. She hit Normandy two days after D-Day and went with the armed forces across Europe. Immediately after the war, she met Albert Hodkinson, a young East-Ender who had started the war as a mechanic -- "Only gentlemen were allowed to fly airplanes," he told me -- but wound up, after the R.A.F. had run out of gentlemen, flying Lancasters over Berlin.

And now Enid is gone. I can only begin to tell you how devastated Marianne and Sean and I feel about that. She was one of those people who was always there and who always deserved to be there. The world is diminished by her passing.


Above: Enid with our then-thirteen-year-old son Sean after the blizzard of 1996. She'd been out shoveling snow, of course.

I am so very sorry for your loss. I remember her very well. She was always so kind. May she Rest in Peace, and prayers and condolences to Albert and all the family.