As Good A Review As Any I've Had 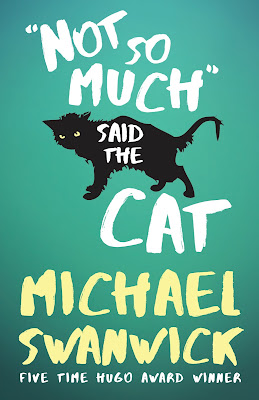 Writers are touchy beasts. I see it in others and I see it in myself and consequently I've given some thought as to exactly why this should be.

My conclusion is that the ability to write good fiction is such a difficult skill to master that it's only possible to muster the discipline required ifC one believes that writing fiction is the single most important thing one could possibly be doing. Which makes the writer one of the most important people on earth. Which is an untenable opinion for any sane individual to hold. We all know ourselves too well to believe that one.

Can you say "cognitive dissonance," boys and girls?

My latest collection of short fiction, Not So Much Said the Cat, received a glowing review in Foundation the other day. So, being a writer, I'm torn over whether to share it with you.

On the one hand, getting such a review in Foundation is a big deal. The reviewers' remit is not to deliver consumer recommendations (buy this! don't bother with that!) but to provide insight into the book being discussed. So in a sense, this is exactly the sort of reaction I've been writing to get.

On the other hand, to reproduce sentences like The stories gathered here demonstrate the artistry and depth to which Swanwick is capable of discussing the structure of reality, questions of authenticity, and the nature of humanity and its relationships or His ability to continuously depict these themes well throughout these stories lends credence to his nature as a writer and his skill at depicting realistic sf worlds inhabited by realistic individuals would go far beyond the social bounds of modesty.

(Though, of course, in the name or promoting not myself, I hope, but my work, I have just done so.)

So instead of cherry-picking the review for praise, I'll note an insight that Molly Cobb, the reviewer, had about my work. She said that my fiction thematically discussed, "questioons of authenticity and the nature of humanity and its relationships." Oh, and also of free will. But I already knew that.

Marianne read that and said, "Still writing about identity, are you?"

It was some thirty years ago that Marianne floored me by pointing out that everything I wrote dealt with the question of identity. That thought had never occurred to me before. But when I looked at my stories in that light, it was inescapable.

I recall that in an interview once I was asked if I could name any insights a critic had given me into my own work and could not. Obviously, I had not been reading the critics carefully enough.