Thinking Outside the Universe Box 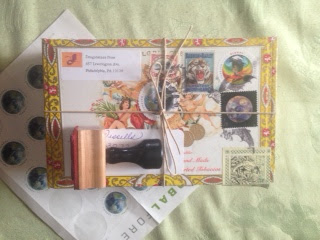 I was present, years ago, when Michael Dirda first visited Gardner Dozois' and Susan Casper's house. Michael examined the bookshelves and exclaimed, "Gardner, I don't think I've ever seen a collection of books looking so delightfully read!"

Not all that long ago, Dragonstairs Press published Universe Boxes, a series of art assemblages containing a beautifully made stab-bound book of my novelette, "Universe Box." Each cigar box's contents were unique to that box (though some were common to all), they were quite reasonably priced as these things go, and only thirteen were made, of which ten were offered for sale.

But much in the spirit of Gardner Dozois, I writes 'em so people can read 'em. Particularly when a story is as much fun (it contains cosmic powers and giraffe wranglers) as this one turned out to be. So I resolved to sell it to one of the genre magazines just as soon as the collectable version sold out.

The Universe Boxes sold out in three and a half minutes.

So, long story short, I've sold "Universe Box" to Asimov's. Keep watching the skies! It'll show up one of these months.


Above: There it is, the distinguished thing. Credit for the boxes is equally split between Marianne and me; I wrote the story and she did everything else. That was a fun project.