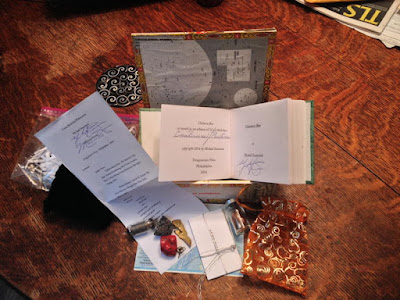 The other day I posted a photo of the first completed box of the Universe Boxes Project. Now here's a glimpse of the interior. Pretty nifty, eh?

The Universe Boxes are issued in an edition of thirteen, of which ten will be offered up for sale by Dragonstairs Press, the nanopublishing juggernaut founded and operated by Marianne Porter. At their center is a stab-bound book with decorative papers containing a 10,500-word story, "Universe Box," written by me. It has never been published before, so this is a true first edition.

Out of the everywhere and nowhere the thief fled, quarks and galaxies crunching underfoot, vacuum rippling like a banner in his wake. Skipping nimbly in and out of space and time, he dropped down into the quantum slush underlying physical existence and then up again into the macrocosmic realms of which reality is but the tiniest province. Nightmares beyond human imagining howled and ravaged at his heels. Nihilism and despair sleeted down on his upturned face. But the thief couldn’t have been happier. His grin was so mad and bright that it would melt granite.
His erection was shocking.


You'll notice that not only is the book itself autographed by the author, but the contents list is autographed by both Marianne Porter and me. That's not only because the work modifying the cigar boxes and the selection of found and created items was done by Ms Porter but also because each box contains a "vaccine," one of a series of small artworks she has created, in which select items are sealed permanently in vaccine bottles, an activity straddling the line between art and shamanistic activity.

Some items within the box, such as the book and a bundle of calling cards for characters in the story, are common to all the boxes. Some are common to other boxes but not to all. And some are unique to each box.

I exist in order to create interesting things. So you can imagine how happy I am with this collaboration.

Nota bene: Dragonstairs Press does not do pre-orders, even for dear friends. A week before the boxes go on sale, information about them will be posted on the Dragonstairs website here.


Above: Photo by Henry Wessells. Whose website at http://endlessbookshelf.net is well worth your perusal.