Me! Me! Wonderful Me! 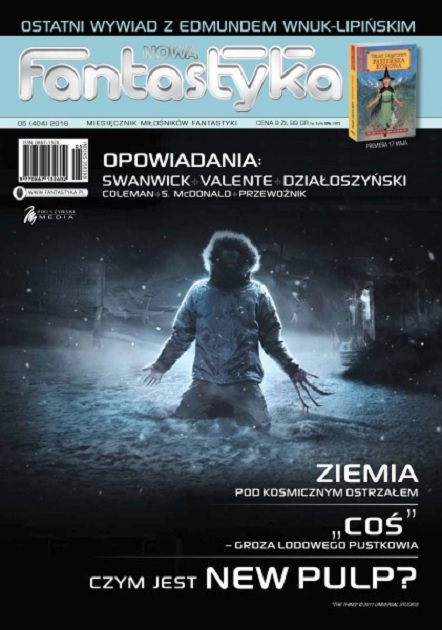 I'm in print again!  The very fine Polish magazine Nowa Fantasyka has just published the translated version of From Babel's Fall'n Glory We Fled as "A za nami ginęła chwała Babel." Alas, as so frequently happens the "word snowflakes" that Uncle Vanya speaks in when he's not employing pidgin were left-justified rather than center-justified, so all the hard work I put in making the structure reflect a trust-based logic was for naught.

But that cannot dim my joy. Poland is a beautiful country and has long been an intellectual center of Europe. So I feel a particular thrill when one of my stories is published there.


And on the self-promotional front...

Reviews for my forthcoming collection (by golly, this month, I believe!) Not So Much, Said the Cat keep pouring in. I've told you about the starred Kirkus review and the starred Publishers Weekly review. Here's a sampling of what's being said elsewhere:

“A whirlwind of stories that take you across the world, through different pockets of time, and into a sample of the lives being lived, Not So Much, Said the Cat is an excellent compilation. Swanwick’s latest book is a delight to read, both entertaining and insightful.”
—Pooled Ink


“I fell head-over-heels in love with this collection of stories.” —Lipstick and Libraries“Half Neil Gaiman, half Kelly Link, wonderfully unique.”


“His writing is flawless and creative, his characters incredibly well-developed for short stories, and the descriptive nature of his text can make you feel as if you’re living in these other worlds right along with the characters. Mr. Swanwick’s readers (and many critics) have gone so far as to call him the ‘god’ of the science fiction world.”
-- Heather Fazio, Times Union


So I am feeling particularly happy these days.

That's all for today. Have a safe and joyous Fourth of July, whether you celebrate it or not.

When The Sun Hits - All things shoegaze. said...

Well...I might actually have to buy it and read it! (Although surely I've read some of it in the rags...)

Man, how many pages of awesome blurbs is this going accrue as front matter before it gets published? Wrap it up critics, us fans want our book already!