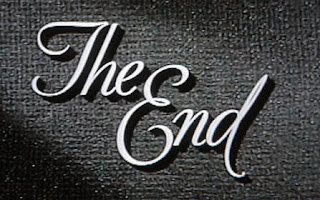 It's hot, I've got work to do, and I don't have any news about forthcoming publications. So here's a quick piece of writing advice:

By which I mean your science fiction stories. And what ticks me off about the way your science fiction story ends is that, after a great deal of suspension of disbelief, after things happen that couldn't possibly happen in the real world, after using up a small but irreplaceable fraction of the time I have left on this planet... you resolve it by having the protagonist feel better.

This is so very, very common. The traumatized veteran of a intergalactic war has an encounter with a sentient war machine and, after discovering their common posthumanity, feels better. The widower invents a machine that allows him to talk to his dead wife, and feels better. An astronaut on Pluto, awaiting rescue, becomes reconciled to his fate and also to the late father who could never express affection for her and feels better. I made up these examples off the top of my head, but they read a lot like stories I've read recently.

The problem is that this isn't a science fiction plot. Science fiction is about change -- and the more challenging the change, the better. Think how much better those stories would be if the vet merged with the war machine, becoming a new organism. Or if the dead wife enlisted her husband's help to escape from Hell. Or if the astronaut died and discovered that when chilled to Plutonian temperatures, the brain keeps on thinking, though the body is inert.

I'm not saying you can't sell stories with and-the-protagonist-felt-better endings. Obviously, they sell all the time. But you're not going to win any awards with them


And before you call me a hypocrite...

Yes, I've done it myself. "An Empty House With Many Doors" has exactly that ending. It was a good story, and I'm not about to apologize for it.

Didn't win any awards, though.

Your last counterexample—the astronaut dying on Pluto—sure sounds like a Larry Niven story, whose title currently escapes me.

But you are right. A pat ending can make for a weak story, unless the path to that ending is unique and powerful. Perfect example, a good friend of mine wrote a story about a small town struggling to find a unique identity in post-interstate America. A con man (very much in the model of "Professor" Harold Hill) comes to town and promises to solve all their problems, only to skip town with all the money. The townspeople then discover they've had a unique culture and identity all along and everyone feels better.
My description makes the story sound dull and cookie-cutter predictable, yet it is one of my favorite stories to read. This is because the journey to that end is filled with wonders. He telegraphs the ending by the second page, there is never any doubt how it will end up, but you root for the individual townspeople because they are such wildly great characters. And in this case, there really could be no other ending.

Some writers can pull off a pat, clichéd ending and still create a great story. Bradbury could do it with grace. J Simon on his good days can do it. Harry Harrison could only do it ironically. Heck our own dear Swanwick can do it. I cannot.

Pat J -- yep. Niven was there first. As with so many other things. I notice that you and I both remembered the story long after we forgot the title ("Wait It Out" -- thank you, Kevin.)

The thing about stories ending with people feeling better is that they keep being published because readers, and editors, seem to like them. I recently ran across a few that had been Readers' Picks in a notable publication. They didn't do much for me, but readers evidently loved them, and the editor must have felt better (so to speak) that they bought them and pleased the readers.

Anyone ever do a study about statistical correspondence between the popularity of happy endings in fiction and media and economic turmoil?

Wasn't that part of Adrian Veidt's system (or meta-system, maybe) in Watchmen?