Probably the Single Coolest Science Fiction Book of the Year 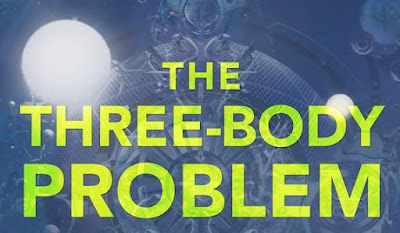 You've probably already heard of The Three-Body Problem.  When I tried to order a copy at Big Blue Marble, the friendly independent bookstore in Chestnut Hill, they told me their distributor had sold every copy they had.  Then, when I called Tor to ask for a copy, my editor friend there, sounding extremely happy, told me that the book was "flying off the shelves." And of course it's currently on the Nebula and Hugo ballots.  So it's not exactly obscure.

Nevertheless, I feel compelled to add a few quiet words of praise for Cixin Liu's novel, the first of a trilogy that's a best-seller in China, ably translated by American writer Ken Liu, just because it's so damnably cool.

Here's the basic premise: In a near-future China, top-level physicists are committing suicide in alarming numbers. Experimental data, it turns out, are no longer consistent. Experiments yield different results every time they are run. Physics is no longer reproducible. As a crusty old cop observes, when things get this strange, there's usually somebody making it happen.

There's a lot to like about this book: the culture and history of China, to begin with. (Did you know that it's perfectly okay now to openly criticize the Cultural Revolution?) The heavy emphasis on science for another. (An engineer of my acquaintance did grumble that there was a lot of hand-waving; but he liked the book anyway.)

Its weaknesses? It's a little old-fashioned structurally, with a great deal of characters delivering lectures on science to one another. But that's undoubtedly part of the reason for its popularity. The prose is functional, rather than beautiful. But that's a good part of the reason why it got translated in the first place..

Mostly, though, I love this book because it contains ideas that I hadn't seen before. Larry Niven's Ringworld, you'll remember, had kind of a ramshackle plot where the characters land on the eponymous artifact, wander about for a bit, and then leave. But the brilliance of the central idea made it a landmark in science fiction.  The Three-Body Problem has that same virtue: original ideas.

Recommended for everyone. New writers in particular.

I think being able to criticize the Cultural Revolution with fiction is nothing new, although its permissibility and popularity has risen and ebbed at least a couple of times since the late seventies. (See: http://en.wikipedia.org/wiki/Scar_literature)

For what it's worth, I don't feel that the criticism of the Cultural Revolution is really political in nature, or at least not aimed at a specific political regime or school of political thought. It's one of multiple layers of discourse on how things like nature, cultural and social forces, meddling from aliens, etc. interfere with scientific progress and the quest for knowledge. It's seen also in the sections set inside the video game, as well those set in the "real world" at the most forward point of narration.

From what I recall, there's no obvious criticism here about how a monopoly on political power, lack of personal liberties and freedoms etc. contributed to the problems faced by the lady scientist. But of course, it's unforgivably Western-centric to assume that this should be there in the first place...