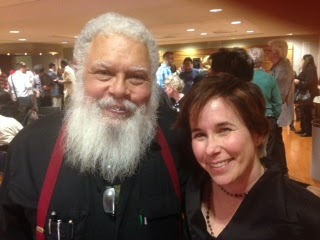 The other day Marianne and I went to Samuel R. Delany's retirement party at Temple University.  Chip, as he is pretty much universally known, drew a large crowd of faculty, students, friends, and other well-wishers.  Those from the local science fiction community who could make it included Gregory Frost, Fran Wilde, and Diane and Lee Weinstein.  I'm probably leaving somebody out, for which I apologize.

Pictured above are Chip and Fran, whom I had just introduced.  I have other, duller pictures of Chip at the event but I figured what the heck, I'd let Fran bask in the reflected glory.  Now, of course, she has to spend the rest of her literary career living up to this association.

There were the usual short speeches, the joke presentation (of a tie), the serious presentation (of a pen), and then, after some preliminary remarks about his career, Delany read a chapter from his book Through the Valley of the Nest of Spiders.  Chip is one of the finest readers in genre, whether that genre be science fiction or gay literature, so it was well worth the hearing.

Two things particularly moved me about the event.  First was that before the reading, during the mix-and-mingle part of the event, Chip very carefully connected with everyone he knew personally, not just chatting them up but talking about them and their lives, in a way that let all of us know that he valued us as people.  That was extraordinary for an event whose purpose was specifically to honor him.

The other thing was the students.  I could not help seeing them -- the scowling young man working intensely upon his inscription in the guest book, the trio of young ladies looking as if they were about to break into nervous giggles -- as bundles of potential, early adults launching themselves upon the ocean of their lives.  They were all so serious and hopeful. They knew that their lives had been touched by an extraordinary man and if they didn't quite know what they were going to do with this, they knew that eventually they would figure it out.

I have no idea what Chip is going to do next.  But when I observed that now his time was his own, he involuntarily exclaimed, "What!?"  So I'm guessing he's still going to be busy as busy.

I see what you did there, Michael.

It was a pleasure to finally meet Chip!

So many of my favorite people in a single room!