Let Me Write A Story About YOU... 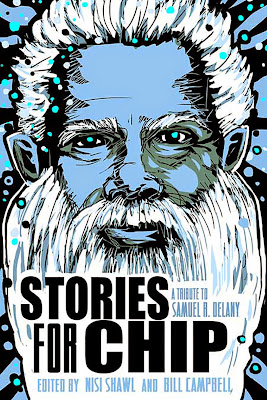 As the Indiegogo funding campaign for Stories For Chip moves into its last days, editors Nisi Shawl and Bill Campbell have unveiled more rewards for the well-heeled, including three bespoke short-short stories (or flash fictions, as they're called nowadays) written by me.

I'll explain what a bespoke story is in just a second.  First, a little background:

Stories For Chip is a festschrift (a book of writings honoring a worthy individual while that person is still alive) celebrating the life and works of Samuel R. Delany, who commonly goes by the nickname "Chip."  Chip is one of the best and most influential writers in the history of science fiction.  He's also cut quite a swath in the circles of criticism and gay pornography.  Anyone reading this blog probably knows quite a bit about the man.

Despite the title, the book contains a mixture of fiction and non-fiction.  My own contribution is an essay titled, "On My First Reading of The Einstein Intersection."  I also appear as a character in a reprint of Eileen Gunn's semitrue metafictional "Michael Swanwick and Samuel R. Delany at the Joyce Kilmer Service Area, March 2005." Here, in near-alphabetical order are all the other pieces:


So... bespoke fiction.  Like bespoke shirts, bespoke fiction is custom-made to fit you. I've contributed up to three stories of roughly 500 words length, certainly no more than a thousand, based on information that the buyer provides about himself, herself, or a loved one.  The buyer gets the original typescript, signed and dated by me.  And I'll throw in the right to post it on your Web page, copy it into your Christmas letter, write it on the side of your barn -- and/or any other non-commercial use that may occur to you.

It's kind of like a Tuckerization, except without all the parts of the story that have nothing to do with You.

These are, I should mention, pricey little things.  They're going for two hundred dollars a pop.  But the money is going toward the creation of a book I devoutly wish to read, so I think it's all in a good cause.

You can find the site, order a copy of the book, maybe go for one of the many special donor perks here.