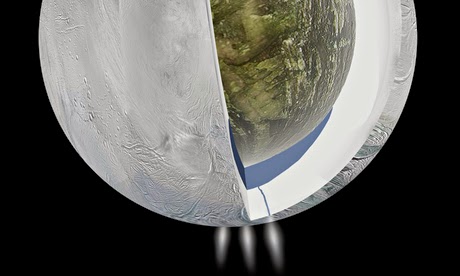 The recent declaration that Enceladus has a small ocean under its icy shell immediately put a relatively obscure moon of Saturn on the forefront of the search for  extraterrestrial life.  Simply because it's easy to imagine sending a probe to collect fresh water-ice from the surface and examining the sample for microscopic life or traces of it.  Less easy is imagining a robot that could swim down one of the water volcanoes, wander the Enceladan Ocean making recordings and then swim back to the surface with its findings.  It couldn't be built today.  Twenty years down the line, maybe.  There are certainly people alive today who will see such a device in operation someday.

This has set me to thinking about the possibility of extraterrestrial and extrasolar life in the universe.  The search so far has been dominated by one honking big restriction:  All we know about life is derived from a closely-related clutch of organisms existing on one lone planet.

So when we're looking for life, the first thing we do is look for water in liquid form.  Because the kind of life we know requires it.  Which is why all the emphasis has been on finding Earthlike planets in the "Goldilocks zone," where liquid water can exist on the surface.

But if life exists in Enceladus...  or in Europa, which we're pretty sure also has an ocean tucked between its ice surface and rocky core...  or in the ice satellites Ganymede, Callisto, Titan, Rhea, Titania, Oberon, Triton, Pluto, Eris, Sedna, or Orcus, all of which are speculated to have such oceans... then the possibility of life beyond the Solar System has just gone up tremendously.


And if life is found to exist in just one other planet in the Sun's entourage and if it can be demonstrated to have arisen independently, then we can confidently stare out into the night sky and see it everywhere.

Intelligent life, now, is a different matter.  There's only the one intelligent species on our planet, and some of us have our doubts about that.

As for Enceladus, you can read the Guardian account here.  Or the Wired article here.

Your link-fu is not strong at the moment: the link to the Guardian story is not a link at all!

http://www.theguardian.com/science/ng-interactive/2014/apr/03/underground-ocean-saturn-moon-enceladus-graphic is probably the go.