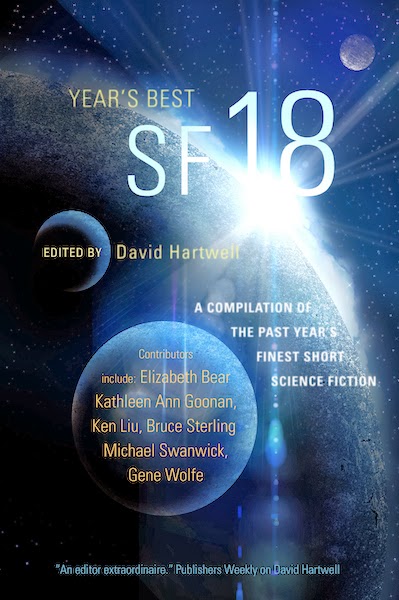 I'm in print again!  David Hartwell's anthology, Year's Best SF 18, arrived in yesterday's mail and it contains my story "The Woman Who Shook the World Tree."

The pleasures of writing a story differ from the pleasures of reading one.  For me, the chief pleasure in this work was getting to work with the story's protagonist, Mariella Coudy.

The story begins:  She was not a pretty child.  Nor did her appearance improve with age.  "You'd better get yourself a good education," her mother would say, alaughing.  "Because you're sure not going to get by on your looks."  But that's a misdirection.  What makes Mariella's life so difficult is not her looks -- there are tons of women who get all the romance, sex, and love they want without being at all beautiful -- or her distant parents, but her genius.  She is simply so far beyond the likes of you and me that she's almost a different, one-woman species.

So half the joy of writing this work was, for me, getting to inhabit the mind of a world-class genius and to pretend, briefly, that I could follow her thoughts.  But the other half lay in getting to create a woman of genius who was as badly socialized and as little aware of it as the worst of her male peers.

Who can forget the mathematician Paul Erdős discovered in the kitchen at 3 a. m., holding a carton of orange juice and staring baffled at the stuff puddling around his feet because he'd wanted a drink and tried to open the carton by stabbing its bottom with a steak knife?  His hosts put up with behavior like this because  of the quality of work he would do while he was visiting.  But women almost never get to be so clueless and yet admired.

I created one who was.  And then, in gratitude for her being such a lovely character, I gave Mariella Coudy everything she'd always thought she'd never have.

I'm not a mathematician and so I have no Erdős number at all.  But I have a Mariella Coudy number of 1.  I believe I'm the only person in the world who can say that.

So how do you write about a person who's smarter than you? How do you fake that?

What would your Erdős number be, if published literary collaborations count equally with published mathematical collaborations (which seems to me far from a ridiculous or outlandish concept)?

What a great notion! I shall cherish it privately.