A Farewell to Rosemary 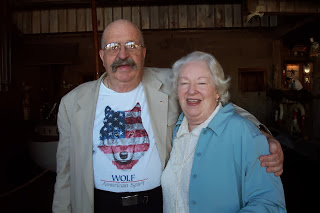 I learned the sad news an hour ago:  Rosemary Wolfe, Gene's wife, died over the weekend.

Gene Wolfe is, for good and sufficient reasons, much beloved in the science fiction community.  So too was Rosemary.  I did not know her well -- I chatted with her only a few times -- but everybody who did spoke of her with genuine affection.

Rosemary had serious medical problems, which made the past many years difficult for her and her beloved husband.  They also made it obvious how deeply and profoundly he loved her.  They two were devoted to each other.

If I start reflecting on the nature of a good marriage and what it means to the two people involved, we'll be here forever.  So instead, I'd like to offer up in Rosemary's memory, the smallest of recollections:

Some years back, Readercon celebrated its 20th anniversary and, as part of the ceremonies, every guest of honor they'd ever had was called up on stage in reverse order:  the most recent first and so on, all the way to their very first goh, Gene Wolfe.  I was somewhere in the middle of the mob.

When Gene's name was announced, I swear that I was the second person on his feet.  The first was Michael Bishop, appropriately enough, a guy whose heart is as big as they come.  Everybody on stage rose up, pretty much simultaneously, followed almost immediately by everybody else in the room.  It was the most heartfelt standing ovation I've ever seen -- and I've seen some that would bring tears to your eyes.

So far as I could see, there was only one person in the hall who wasn't standing -- and that was because Rosemary's health wouldn't allow it.  But I was watching her and she was the happiest person there.  She glowed.  And -- I swear I could tell -- she wasn't basking in reflected glory.  She was simply happy that the man she loved was being honored so.

That's how I'll always remember her.

God bless you and keep you, Rosemary.   I'm sure you're safe in His care now.

Thank you, Michael. I've admired their marriage from afar for years. Your reminiscence watered my eyes and your benediction warmed my soul.