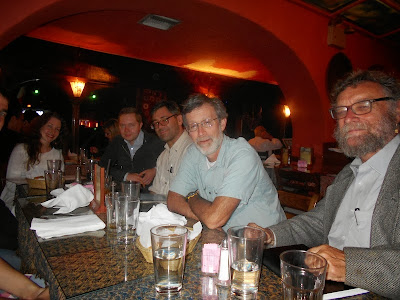 Monday night I drove into New York City for a dinner hosted by Gordon Van Gelder, owner/editor of The Magazine of Fantasy and Science Fiction, in honor of literary culture hero Robert Reed.  Bob was in the Big Apple for the first time in twenty years and was struck by how greatly the city has improved itself since then.

Bob told me of his adventures in the gaming industry -- all positive, you'll be pleased to know -- and said that he'd been so busy that he'd written hardly any short fiction at all recently.  "I've only sold six stories this year," he said.

I, in turn, very politely refrained from punching him out for that.

Not shown but present:  Photographer to the Stars, Marianne Porter.

Robert Reed and I talked some about new writers and he asked a question which they should find terrifying.  I'll post that here, two days from now. 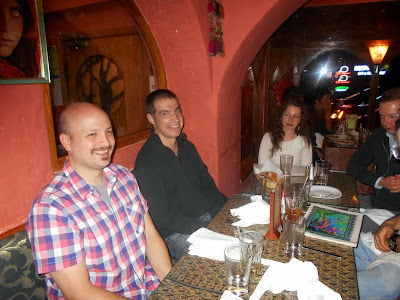