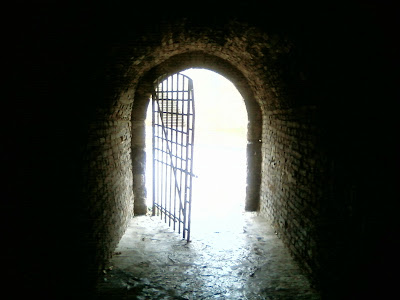 Some time back, over on Facebook, a reader expressed herself rather vehemently about what "a terrible story" my own "Radiant Doors" was.

I was not offended, because I knew what she was saying:  That it upset her to read.  That it made her unhappy.  That it told her horrific things she didn't want to know.  That was indeed the kind of story it was.  I know, I wrote it.  And I can remember what a depressing moment it was when I got the idea for "Radiant Doors" and knew I was going to have to write it.

The story's premise is that one day radiant doors open in the air in countries around the world.  Through those doors millions of refugees come pouring -- people who have been hideously and in some cases grotesquely abused.

They come from our future.

The story is seen through the eyes of a relief worker, a woman who has been driven to the edge by the horrific things she's seen and heard and the awareness that every day that future is twenty-four hours closer than it was the day before.

Not long after the story was published, a former Clarion West student came to my house to drop off an invitation to his wedding.  His fiance was a rabbi and at one point, she took my wife  aside, said that she'd just read it, and then asked, "How can you sleep beside him, knowing he has those things inside his head?"

Marianne, God bless her, smiled and said, "Oh, they're not in his head anymore.  They're in yours."

I waited some time before posting this, because I didn't want it to seem that I was trying to convince the reader to like the story.  She came to it with an open mind and a writer can ask no more.

But her comment gave me the chance to answer a question that I know arises in many readers' minds:  Why would you write about such terrible things?

Because they exist.  Because the potential for them resides within all of us.  Because refusing to look at them does not make them go away.  Because periodically we must recognize all these hard truths.

I have no criticism of the reader who thought "Radiant Doors" was a terrible story.  It was only her phrasing that was a frazz imprecise, and in a social medium that is very close to casual conversation, that's very easily understood.

"Radiant Doors" is not a terrible story.  It's a very good story about terrible things.

I wonder if that person ever read "The Dead", it seems like a more obvious choice for most soul-scarring short story. Especially the job interview question...

'It's a very good story about terrible things.'

Yes, it is. So is 'Wild Minds.' (I thought, too, that your novella 'Griffin's Egg' was criminally underrated.)

And since you clearly know that, since you've directly stated it, I am going to be slightly churlish here. I apologize. But perhaps at some point you'll take a break from Darger & Surplus and dragons -- however profitable and entertained the audience for such fiction might be -- and take the chance to write more stories like 'Radiant Doors'?

"Marianne, God bless her, smiled and said, 'Oh, they're not in his head anymore. They're in yours.'"

You do know you married above you, don't you?