The Best Cheesesteak in Philadelphia! 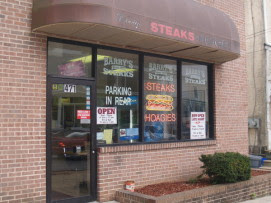 In Philadelphia, you get perfection.

But where in Philadelphia can you get the best cheesesteak in the universe?  Not at Pat's King of Steaks, tourist attraction though it is.  Nor Gino's, though that's the other famous one.  The fact that they ask if you want it with Cheez Whiz alone would be enough to disqualify them.  But I've had their real cheeseteaks and they're simply not the best.

There are by general acclamation, two leading candidates for this august honor -- D'Alessandro's and Barry's, both in Roxborough.  So tonight, my Not At All Nepotistic Jury of Family put this weighty matter to the test.  Coordinating our movements, we simultaneously bought cheesesteaks at both of these august establishments and conducted a tasting.

And the winner was clear.  The texture and flavor of the meet was superior, the cheese tasted better, and the roll -- from Liscio's --  was chewier.  Hands down and unanimously, the NAANJoF decided for . . . Barry's!

Conveniently located within a block of my house.  But that's just my own typical good luck.

Was this experiment double blind?

We search for the consummate cheesesteak
To boost our cholesterol intake
We want provolone
Not the whiz, that is phony
Give us onions and peppers for God’s sake!

Sorry, Mama's on Belmont takes the roll (so to speak)!