Judith Moffett on The Left Hand of Darkness 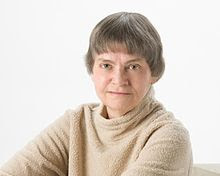 Last week I had a blog post with the admittedly provocative title Is The Left Hand of Darkness Sexist?  My answer was No.  But in the comments, various people raised issues from the decades that ensued of examination of, argumentation over, and engagement with the novel.  For my money, that's an indication that the book was a success.

The longest response, almost an essay in its own right, came from Judith Moffett, who unintentionally triggered the post, long ago when she let Gregory Frost and me teach her class in her absence.  It was so thoughtful (and, I must confess, so in line with my own thoughts on the book) that I'm reposting it here so everybody can see it.

And you can read the comments here.

I don't think it makes sense to label the book "sexist" or "homophobic." It may look those things from a contemporary perspective, and my students may have called it sexist for reasons that made sense to them in the 80s, but in 1969, its year of publication, Left Hand made a groundbreaking assault on traditional gender attitudes and entrenched homophobia. Change has to begin somewhere. Fair enough to see and say that the novel is grounded in the moment of its appearance; not fair to dismiss the many more ways it burst through that moment to carry feminist consciousness forward, to the point where people can look back and mainly see, not the revolutionary message, but the flaws!


Judy is best-known in science fiction for such highly-regarded novels as Penterra and her Hefn on Earth trilogy -- she should be forgiven the punning ubertitle -- but she's also the author of  the suburban homesteading nonfiction classic Homestead Year, and various critical works and translations of poetry.  I'm a particular fan of her second (I think) collection of poetry, Whinny Moor Crossing.

I put it to you that English does not lack a neuter pronoun. Any English speaker has a perfectly good and natural one at their disposal.

Mandarin Chinese actually has only one 3rd person pronoun, but at some point in the early 20th century a linguist/poet names Liu Bannong decided it would be helpful if pronouns had male and female versions in written vernacular Chinese. So a written character for a third person pronoun for human females was eventually introduced, one previously neuter version started to to be used for human males, and another neuter version was (which originally meant bug, snake, creepy-crawley thing, etc.) was used for non-gendered things, animals and cases when gender was not known. All three characters are still pronounced the same way (although Liu tried to convince people to pronounce it differently, this did not catch on), and a linguist would tell you that they are actually the same word.

The other day I read a Chinese language flyer that a nice Christian fellow at the Chinese grocery handed me and my wife, and I was puzzled by this odd character that appeared over and over again in the bible verses printed thereon. After a while I realized that Christians at some point had created another pronoun for God. It's also pronounced the same as the other 3rd person pronouns, just written with a different radical. I guess they couldn't bring themselves to use the neuter 3rd person that originally meant "snake" etc. I'm assuming of course that this was developed after the new female 3rdP pronoun.

I think the moral of the story is that people are always unsatisfied with the pronouns at their disposal.

Interesting! I just started trying to learn Mandarin and was intrigued by 他 and 她. I didn't know that was a modern innovation.

David Stone wrote: "All three characters are still pronounced the same way (although Liu tried to convince people to pronounce it differently, this did not catch on), and a linguist would tell you that they are actually the same word."

Well, I am a linguist, and I'd say that they are three ways of writing the same word. Characters are not words, although a lot of people, particularly in East Asia, are confused about the difference. www.pinyin.info is a good place to learn about the myths surrounding Chinese characters.

You are absolutely right Nick, I should have written "a linguist would tell you that they refer to the same word".

What I learned in school is that generally each character stands for a single phoneme, meaning they represent the elemental building blocks of words, more like word roots than words. In the case of the third person pronoun, a single phoneme by itself constitutes a word.

To clarify for others who might be interested: In modern Chinese most words are made up of more than one morpheme, so are written with more than one character. The singular pronouns: wo (I/me), ta (he/him/she/her/it) etc. are exceptions.

D'oh misspoke twice in one comments section. You're right again nick, I actually "corrected" it to the wrong term. I'll leave the linguistic to the linguists. .

No, don't do that! Linguistics is too important to leave to linguists. And although it's a bit out of the public consciousness, compared to, say, particle physics, it's an area of study where it's possible to make real contributions with no specialist equipment (again, compare with particle physics.)

Do you remember which character those nice Christians used in their flyer for "God"?

And which 3rd person word originally meaning "snake" are you referring to?