How To Win A Hugo 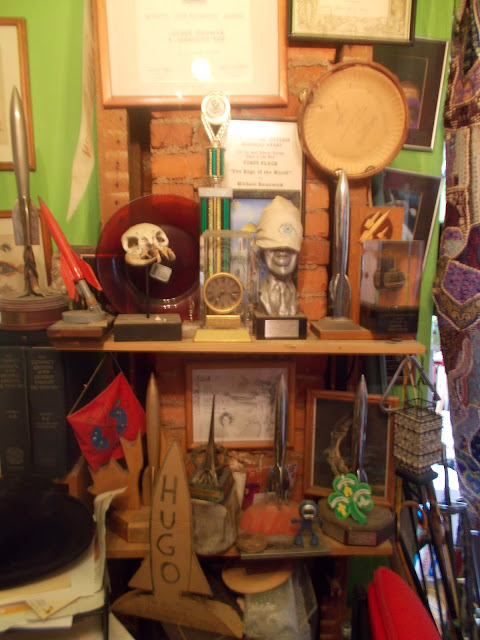 So you want to win a Hugo Award?  Well . . .  I've explained all this before, but it bears repeating.  New writers appear all the time and they need to hear the basics.

The simplest way to win a Hugo Award for fiction has three steps, two of them easy and one difficult.

The difficult one comes first:  1.  Make yourself into a good writer.

Taken care of that one?  Okay.  Here's the second step:  2.  Write a hard science fiction story.  With space ships.


Scientifically valid outer space fiction is at the core of science fiction -- and it's in high demand not only with readers but with editors.  Years ago, when Gardner Dozois and Ellen Datlow edited the two most prestigious magazines in the field (Asimov's and Omni, respectively), I dropped in on Ellen's office in NYC.  Ellen asked me what I was working on and I said I'd just finished a really good zombie story.  (It was, too, so good that I gave it the title of James Joyce's best short story, "The Dead.")

Three days later, I visited Gardner at his Philadelphia apartment.  As I left, he bellowed after me from the stoop, "Write me some hard science fiction, Michael!  None of this fantasy!  None of this magic realism crap!  Hard Science Fiction!  With rockets!"

Some years later, I decided to put this to the test.  So I started downloading and reading NASA papers on Io, day after day, week after week.  By the time I had a couple of cartons full, the data gave me a story.  I wrote it up in a clean, open prose style -- and "The Very Pulse of the Machine" won me my first Hugo.

3.  Publish your story in one of the major magazines or ezines, where it will be seen by a large number of the sort of people who who recommend and vote for the Hugos.

Why do I specify a story, rather than a novel?  Because there are three short fiction categories and only one novel category.    Also because in the time it takes to write a novel, you can write and publish many short stories, thus increasing your chances.

And that's all.  It's just that simple.

Nothing is guaranteed, of course.  But you wanted to know, so I told you.

But wait -- what if other writers write hard science fiction stories set in space? What if some of them make the ballot? What if two of them are Michael Swanwick or Ted Chiang?

I've found that if you place three stories on the ballot, your win is pretty much assured.

Oh no! My space blasting hard SF story is backed up behind a medical thriller and a dinosaur story. What to do? What to do! Go for that Hugo or write what I want?

> Go for that Hugo or write what I want?

Write a space based SF story involving dinosaurs and medicine. After all - that kind of thing worked very well for James White.