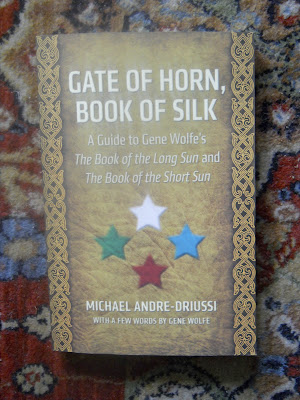 See what I have!  I am now the envy of every admirer of Gene Wolfe who happens to be of a scholarly bent.

Michael Andre-Driussi is the author of Lexicon Urthus and The Wizard Knight Companion, both of which are indispensable reference works for the serious Wolfean or Wolfeist or Werwolfe or whatever the heck you'd call those of us who enjoy delving deep into the master's works.  To this select company we may now add Gate of Horn, Book of Silk: A Guide to Gene Wolfe's The Book of the Long Sun and The Book of the Short Sun.

This is the easiest possible book to review because if you need it, you know that you do and you've probably just now returned to this post all in a sweat to find out why you can't find it on any of the online booksellers.

That's because it's not scheduled to be published until sometime in, um, October I believe.  Here, though, just to give you a taste, is a single entry from the Long Sun half:

Xiphias, Master   "a one-legged fencing teacher" (III, list); "Silk's self-appointed bodyguard" (IV, list).  Auk introduces Silk to Master Xiphias as a new student (I, chap. 13. 324).  Having lost a leg to treachery, Xiphias now has a removable prosthetic made up of pieces from five others.  (See NUMEROLOGY.)  He thinks Silk is left-handed and has studied under another sword master.  (On the other hand, Silk's right arm has been injured in his night at Blood's mansion, which might cast doubt upon Xiphias's professional opinion in spotting a wound, or the behavior compensating for a wound, as well as gauging sword-fighting ability.)
During the revolution of Viron, Xiphias participates in the battle of Cage Street and kills five troopers (III, chap. 6, 229).
Zoology: a genus of fishes comprising the common swordfish.


and, what the heck:


In a better world people like Andre-Driussi would create books like this, uncommercial though they may be, simply because they ought to exist.  The fact that he and they nevertheless exist in our own, fallen universe is inexplicable.  Divine intervention may well be involved.

Excellent - another one to add to my small stack of Wolfe criticism.

I think one of the books I most need in the world would be an annotated reading guide to Wolfe's short stories. They seem to have been neglected a bit in published criticism (though there's plenty to be gleaned from the Urth mailing list if you're patient) and they're for the most part my favourites of his work.

On more important things: Obviously you've been following the Pussy Riot thing, having blogged about them once. I've just found a good post on the ever reliable LaguageLog on the difficulties of rendering 'Pussy Riot' into Russian while maintaining the double entendre. Odd to think of a Russian band needing their name translated into Russian, but that's the modern world:

"..the serious Wolfean or Wolfeist or Werwolfe or whatever the heck you'd call those of us who enjoy delving deep into the master's work..."

Well, taking one's cue from the Master, I would say that you'd call us Lukosophists. Or possibly Eisengrimandoes.

But that's just me.

As a zoologist, I also greatly appreciated Wolfe's introduction of various obscure extinct and extant creatures into The Book of the New Sun, by colloquial versions of either their Classical (the alzabo) or Linnean names (those arsinotheres being ridden by Amazons in the battles in Orythia, for instance). Nice in-jokes for people such as myself.

And the problem the human race is (in large, unknowingly) facing is the possibility of extinction! So the in-jokes actually cut to the essence. That's so very Lukosophian.

Short stories, alas, get scanted across the board. But I'd love to see a selection of Gene's stories annotated. I could probably do the easier half of the entries for "The Eyeflash Miracles" myself.

I'd like to see what you have to say about "The Eyeflash Miracles."

That one tends to be considered lesser-grade classic-period Wolfe by many. I'm not sure that's right.

2 typos in the first entry. I hope they were your own error in transcribing?

Typos corrected. Thanks for pointing 'em out. Mine, of course.

A month ago I'd never heard of you - then I read the astonishingly comprehensive and even handed FAQ you wrote on N-Back memory training. It's been a fascinating read - thank you for taking the time to compile it.

And now you turn up on Michael Swanwick's blog, which I've been reading off and on for years!

Clear proof - if any were needed - that there are really only 20 or 30 people on the internet.

Hannah's Dad: you'd be surprised how often I hear that.

But seriously, I've been a fan of Wolfe ever since Severian and I encountered Master Ultan.

A smaller world even than you'd think - there was an Ultan in the year ahead of me in high school, and a Roche in my year.