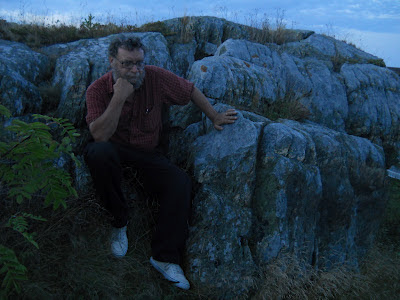 I've got another mini writing lesson today, this time about cutting excessive description.  But because using bad amateur prose for an example is like tasering fish in a barrel, I'm going to use a paragraph from an Isak Dinesen story.  Then, because all prescriptive writing advice is inherently flawed, I'm going to critique my own critique.

Here's the first part of a paragraph of "The Fish":

They rode through the forest.  In the dripping-wet woods, the young leaves were still soft and slack, silky, less like leaves than like petals, and drooping in the sweet forest-air like seaweeds in deep water.  Under the tree-crowns the forest-road was filled with translucent clarity, and with the live, bitter fragrance of fresh foliage and flowers of maple trees and poplars.  In the fine drizzling rain the birds sang on all sides; the stockdove was cooing in the high branches as they rode beneath them.

So what's wrong with this?  Everything except the first sentence.  It's vague, clogged with adjectives, hyphenated to a fare-thee-well, leans heavily on cliches and after a while the words all run together in a sodden mass of generic description.

I'm sure a great deal of work went into this block of prose.  But at this point adding more work will not improve it.  Everything (except that first sentence) must be torn out and the writer must start again from scratch.

This time, however, the writer should abandon that overdecorated and overstuffed Victorian mode of description.  One of the greatest influences on Twentieth Century prose was the invention of cinema followed shortly by the realization on the part of writers that simple clean actions and images can do the heavy lifting that previously was the job of press-gangs of adjectives.

Now let's look at the final sentence of the paragraph, which I left off of the above:

Once, a fox crossed the winding road in front of them, stopped a second and gazed at the riders, his brush on the ground, then slid off, like a small red flame extinguished in the wet ferns.

Now that's more like it!  It's vivid, it's memorable, and the simile at the end is something the readers can put in their pockets and carry away with them.  It should be kept intact.

Mind you, the prose I want cut is actually pretty good.  I'm sure that Dinesen was quite attached to it.  But if you want to get anywhere as a writer, you've got to learn to kill your darlings.

What's wrong with the above critique?  One thing, really, and it can be phrased in two different ways.  Either:

Many readers like this story exactly the way it is.

The critique presupposes that there is only one way to write well -- my way.

De gustibus non disputandum.  Or, as Avram Davidson like to say, Of taste and scent, no argument.  When writers talk about what is good and bad in writing they are almost always speakin to themselves.  Because one has to keep a constant eye on one's own prose to keep from backsliding, falling away from the high standards that one has painfully built up over the years.  The danger is that said writer might come to believe that those local truths which apply only to oneself are universals.  And the greater danger is that the gonnabe writers he is addressing might make that mistake as well.

Because good writing is whatever you can get away with.  Period.

So if you're still in the learning-your-craft stage, take the above critique and do your best to apply it to your own work.  If it helps, then keep it.  But if it doesn't, you should discard it without guilt or regret.

Because there's no such thing as One Size Fits All pantyhose.

Above:  Me, sitting on the Devil's Chair atop Thunderbolt Hill in Brigus, Newfoundland.  I felt quite at home there.  (Photo by Rob.)

Well, I am a huge Dinesen fan. However, I don't remember that story. Perhaps that is telling confession.

Dinesen's life's motto, interesting enough, was "Be bold be bold, but not too bold" It comes from an English Bluebeard variant called (ready for this?) "Mr. Fox." Yeah, I know a lot of this sort of stuff.

But she comes to written storytelling through oral telling, a Sheherazade telling stories to her lover, Denis Finch-Hatton. They were both worshippers of words, sounds, the descriptiveness of the naturalist.

I can enjoy spare prose as well. But I don't read Dinsesen (or Angela Carter or Le Guin or Robert Louis Stevenson or. . .) expecting Hemingway. Or you.

"The Fish" is a terrific story, and looked at first to be a fantasy. It may actually be one, I'd have to reread it carefully to decide. You can find it in her WINTER'S TALES.

In retrospect, I don't think I sufficiently praised her fox. That's a sentence you could enamel and wear as a brooch.