The Rarest and Least Valuable of Books 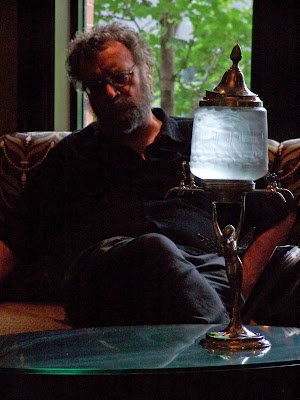 The picture above was taken in Montreal by my friend Rob . I'd run into Charlie Stross, who wanted to talk business and just as we were about to pop into a bar in the basement of the Palais de Congres de Montreal, Marianne said, "What's wrong with the absinthe bar, across the street?" So the four of us and Gail as well ordered our absinthes and the waitress brought out the traditional water-drizzling device for melting the sugar cubes into the drinks.

I was doing legitimate business, really! But after seeing the picture, I don't think I'll be deducting the abinthe from my taxes as a business expense.

I went, as I do most months, to the Philadelphia Fantastic reading. I pretty much had no choice, because I was reading "From Babel's Fall'n Glory We Fled . . ." from Gardner's The Year's Best Science Fiction: Twenty-Sixth Annual Collection. Marianne and I did the reading, actually, with her doing the suit's voices and me the rest. Which made it possible to read alout a text which is almost unrelentingly visual. Gardner Dozois also spoke on the making of the volume, and why publishing, science fiction, and indeed the printed word are all doomed to catastrophic collapse within the next five years.

But the best part of the evening is always the conversation at dinner afterwards. I told Darrell Schweitzer that I was able to inform Maureen Kincaid Speller that her copy of Madeleine was extraordinarily rare though very little desired, and he of course one-upped me. He'd recently found a century or more old collection of fantasy poetry (mythological creatures, Celtic fantasy kind of stuff) by a writer about whom absolutely no reference can be discovered on the Web. Further, it's inscribed by the author to his brother, and there are annotations of the text. So far as he can tell, his is the only copy of the book to survive. And there's no demand for it, because nobody has heard of the guy. "If he'd turned out to be Yeats, I'd be rich," Darrell said wryly.

Victoria McManus told me that too many of my posts are too short. "Really?" I said. "I thought the whole point was to be brief, so people could sip quickly and browse on."

So now I don't know. And I thought I'd put out the question to everyone reading this. Should these posts be longer? I can't guarantee to do anything about it if they should. But at least I'd know.

I figure it's your blog, you can post whatever length you want. I enjoy what I read here, and the length is irrelevant.

I am totally writing mine off on my taxes:

as for length -- having blogged consistently since 1999 i can say that posts that are too long and don't have images tend to get ignored, posts that mention six different things each with their own paragraph are okay, but if one is more important, it needs its own post.

posts that end with a question get more responses.

never post something serious and then end with a flip line about some cute act performed by your cat, because you'll end up hijacking your own post.

I second LadyC's thoughts above.

I really enjoyed yours and Marianne's reading of "Babel's Fall..." at Chattacon in '08! Ol' Dozois' got good taste, he does.

A friend of mine once had a little book of mathematics-- I forget what it was exactly-- which from the inscription had once belonged to Willie Fowler (heard of him? he won a Nobel Prize in physics). On one page in the margin was written, "e^(i theta) = sin theta + i cos theta," which is wrong.

I don't have anything so precious as that, although I did once find a copy of Clausewitz's "On War," which had evidently belonged to Max "also won a Nobel Prize" Delbruck.