Kyle Cassidy and the Energizer Bunny ... Separated at Birth? 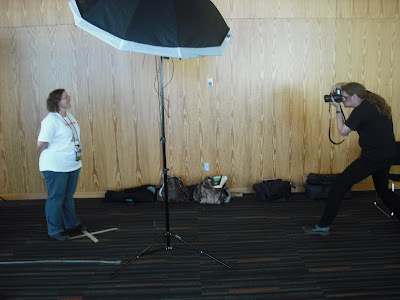 As anybody who even casually follows this blog knows, Kyle Cassidy has a project going, Where I Write, photos of authors in their work spaces. So far it's been plugged in both Wired and Boing-Boing, and the contract for the inevitable book hasn't even been signed yet.

Well, Kyle went to his first Worldcon -- Anticipation in Montreal -- a week and a half ago, in part to publicize the project, excerpts of which were published in the program book. And as long as he was there, he set up his gear and started photographing fans! Show above is my own amateurish snapshot of Kyle at work. The guy is astonishing to watch. He focuses, frames, takes a few fast shots and in a matter of seconds comes up with a picture that's an honest portrayal of how his subject really looks and attractive at the same time.

Sort of the anti-matter universe opposite of a driver's license photo.

The results were so good that they spawned several more projects in Kyle's fertile mind. In addition to at least one other project he shot at the convention just as long as he was there. Kyle really is, to borrow John Irving's term, Captain Energy.

And it's contageous. Back in the early Eighties, it was new stories by the likes of Stan Robinson or Bruce Sterling that got me fired up to write more. Now it's just hanging around with Kyle. He reminds me just how much fun work can be.

I went to see Miyazaki's latest yesterday. Fabulous stuff. There's been a certain amount of grumbling because it's not better than Spiritied Away. But that's not what he set out to do. He's made a children's film for children. And it's a great one.

You should rush out to see it in the theater right away, though, because it's distributed by Disney which has a vested interest in keeping it away from American eyes.

You can see the photos here: