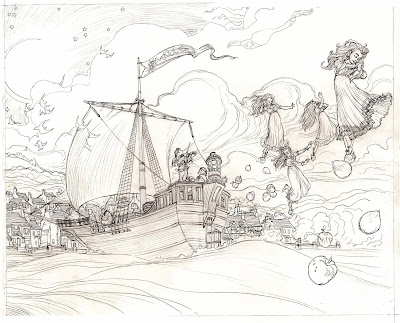 The above is Charles Vess's sketch for the frontispiece of Hope-in-the-Mist which he gave me permission to post here.


Some totally unnecessary (but fun) annotations of the above sketch . . .

1. The apples: In Mirrlees's novel, the tranquility of the sleepy backwater country Dorimare is disturbed when somebody begins smuggling fruit from neighboring Fairyland into Lud-in-the-Mist, its capitol city. The effects of eating fairy fruit are an alarming mixture of madness and addiction.

2. The "Crabapple Blossoms": The dancing girls are the students of Miss Primrose Crabapple's Academy for young ladies who, after being exposed to fairy fruit and to the fiddle music of Portunus, flee their mundane lives and dance away to Fairyland.

3. The perspective: Note how everything billows -- the clouds, the winds, the land, the water. Though the sketch at first appears to be a model of serenity, all (save for the town of Lud itself) is in flux and motion. The swell in the water indicates that the scene is set at the confluence of the Dapple and the Dawl, Lud's two rivers. An old maxim of Dorimare bade one never forget that "The Dapple flows into the Dawl." The Dawl was the mercantile river; but the Dapple flowed out of Fairyland.

Note also that the viewer's perspective is from the water -- which is to say that the viewer, who may think everything is fine and beautiful, is actually drowning.

4. The wicker frails: If you look closely, you'll see baskets of smuggled apples on the deck of the merchanter.

5. The fiddler: Actually a conflation of the fiddler Portunus, "a queer wizened old man" with bright eyes, and the rather more handsome Willy Wisp, a constant threat to the virtue of young women.

6. The crew: These are the Silent People, as they are known in Dorimare, which is to say the dead.

7. The pennant: Decorated with an ivy-and-squills pattern, the badge of Dorimare's former and long-dead (but still active) ruler, Duke Aubrey.

8. The birds: In Mirrlees's mythology, birds are emblematic of Fairyland. The villainous Endymion Leer declares that in Faerie birds are dreams.

9. The sun, moon, and stars: The most powerful oath one can swear in Dorimare is, "By the Sun, Moon, and Stars, and the Golden Apples of the West."

10. The apples again: Note how the apples serve as literal apples, metaphoric drug, musical notes, and the lyke road as well -- the great white way, as Mirrlees called it, which is simultaneously the Milky Way, the road to Fairyland, and the way to death.

This last in particular neatly demonstrates Vess's extreme economy of imagery. There is a great deal encoded into the sketch and yet he manages to make it look not cluttered but clean, open, and obvious. It's like a conjuring trick, really. Even if you know how it's done, it's still magical.

Just gorgeous! I have loved Vess' work since first coming across him in Gaiman's Sandman.

The annotations are also really interesting. After hearing how much Gaiman loves this story, I think that this post (and your annotations) may have pushed me over the edge to try to find a copy to purchase.

Lud-in-the-Mist was a very strange book when it first came out. But it's grown much stranger since, with the codification of genre fantasy.

Consider the hero, Nathaniel Chanticleer: He's pudy, married, and mayor of Lud. Plus he has an unhealthy fixation on death. This is NOT your standard farmboy-with-a-destiny.

One of Neil Gaiman's most attractive characteristics, incidentally, is his willingness to acknowledge and promote those writers who influenced him. Not all writers as successful as he is will do that.