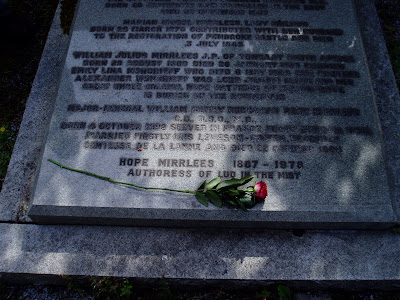 It's official! Hope-in-the-Mist, the first book-length study ever of the great fantasist Hope Mirrlees will be published on July 10th at Readercon in Burlington, Massachussetts.

Bookman extraordinaire Henry Wessells will be publishing the book under his Temporary Culture imprint. At 96 pages, it'll be a slim but (knowing Henry) beautiful book. With an introduction by Neil Gaiman and a frontispiece by Charles Vess. Why those two in particular? Simply because Neil's Stardust was in part inspired by Mirrlee's great fantasy novel Lud-in-the-Mist, and because Vess did the illustration for the first published version.

Intelligent people can argue for hours about which version (illustrated, prose-only, or movie) is best. But as for me, I saw the Vess version first and imprinted on it like a little baby duck. So I, quite appropriately, am extremely happy.

Details and ordering info can be found here.

Everybody has a hobby. Mine is writing. After a long day of courting literary immortality, I like to relax by writing non-fiction. Several years ago, I noticed that the only thing anybody appeared to know about Hope Mirrlees was that Virginia Woolf had called her "“her own heroine — capricious, exacting, exquisite, very learned, and beautifully dressed." So I went to Woolf's Diaries and Letters and copied down everything that Woolf had written about her.

I followed those leads to other leads in a treasure-hunt that went on for years. I found myself in contact with academics, critics, and relatives of the author all over the world. With his permission, I published a long letter from Mirrlees's nephew Count (now Prince) Robin Ian Evelyn Milne Stuart de la Lanne-Mirrlees in the New York Review of Science Fiction. The late Julia Briggs as a courtesy sent me a draft of her article on Mirrlees for the Dictionary of National Biography -- and I sent her back corrections. I received a note from T. S. Eliot's widow Valerie, granting me permission to quote from one of her husband's unpublished letters.

It was a great intellectual adventure for me.

And now it's over. Since Julia Briggs died, I've been so far as I can determine the world's foremost authority on Hope Mirrlees. However, I put everything I know about her into the book and so whoever reads Hope-in-the-Mist and then discovers one more fact about the lady (what she said at that tea with Yeats, what Picasso thought of her, the title of her never-written fourth novel) will instantly inherit the distinction. With, I might add, my blessing.

This post is getting a little long. So I'll tell you tomorrow.

I'll be sure and check it out.

I got the cheaper paperback because I don't think it's ethical to bind books in real unicorn skin.