A Jarful of Keys 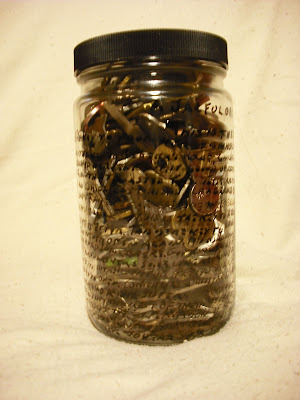 It's a slow, snowy couple of days, so I'm catching up on all those chores I've been putting off. One of which is to do something about that jar of keys in the downstairs bathroom. So I wrote a story for it and wrote the story on the jar, using an art pen designed for that purpose. Later today, after the ink has dried for 24 hours, I'll bake the jar in the oven, as per instructions.

And here's what I wrote:

A Jarful of Keys
This is the key to the kingdom. This is the key to the safe. The key to your heart is in here somewhere, but damned if I know where. This is the key to Rebecca’s house which I was supposed to keep safe and didn’t, so when she locked herself out, it wound up costing her two hundred dollars, to say nothing of all that wasted time. These are the keys to Sean’s battered old BMW, which he lost, and which cost him half a grand because he didn’t have duplicates and he’d parked his father’s car captive in the garage, so he had to replace the ignition and all the locks. This is the key to a room in a no-name motel, and the less said about that the better. This is the key to a door that no longer exists. The door to this key exists but will never open again. It’s a sad story, but too long to go into here. This one’s just a key I found on the road somewhere. God knows why I picked it up. This one opens a pirate chest. No, really. It’s around here somewhere. Why don’t you kids go look for it? I’ll let you keep half. That one fits my big sister Patty’s diary. Or anybody else’s for that matter, but it was Patty’s I used it to open. Which was a mistake. Anybody who thinks women are “the weaker sex,” never had a big sister.

And the locks? The locks are gone for the most part and rusted shut the rest of them, never to open again. So the only use these keys have anymore is to elicit the explanation of how they wound up here. I’m pretty sure you’ve got a key somewhere that belongs in the jar. Why don’t you dig it out and toss it in? We’d all love to hear your story.

I'm glad you like it. It joins a small collection of unique and unobtainable story objects that are scattered about the house.

Now, if I can only find my diamond-tipped pen, I can finish the plexi lamp project.