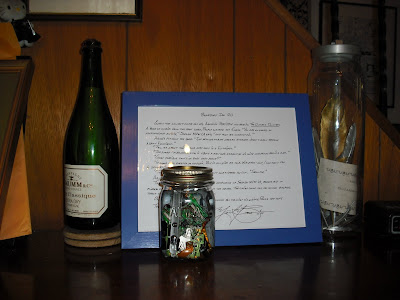 Pictured above is my latest short-short story. This one goes with a Mason jar I filled with mineral oil and the guts of some failed consumer electronics. The jar to the right of it is "Robot Feathers," one in an extremely short series of two (the other was a wedding present) storylike objects. The bottle to the left contains my autobiography. The story itself is a light homage to (of course) Ray Bradbury's classic, "The Jar."
And -- just so as not to be a tease -- here's the story itself:
Bradbury Jar 2.0

When the lawbot came for him, Archivist 34N/118W was reading The October Country, a book of stories from the days when People walked the Earth. “You are engaged in nonfunctional activity,” Sheriff NNW-LA said, “and must be corrected.”

“Tell me about this dream, and why it is functional.”

“The story I’m reading now is about a man who dismantles his wife and places her in a jar.”

What possible function does that serve?”

“It would take forever to explain. But if you give me your disruptor-gun, I can show you in a matter of seconds.”

“That is eminently optimal.” The lawbot handed over his gun. “Show me.”

The next morning, Mason jars containing components of Sheriff NNW-LA, preserved in mineral oil, were mailed to robots throughout the sector. The crime could not be solved because there was no rational explanation for it.

But that night, dreams returned to the world for the first time since People had left.

They were all nightmares.

this story, Bradbury Jar 2.0, is brilliant and its associated container is concrete and essential. This is also a poem, you know, not one single word out of place. Form is function.

The tricky part was writing it without using the word "logical."